I have pulled together a few pages (see below) relevant to my previous two posts. Some of the damaging innuendo regarding Valentino's coffin and burial have been dispelled both in our book, The Rudolph Valentino Case Files and in Jeanne DeRecqueville's book, which Renato heroically translated, “Rudolph Valentino In English”.

Robert Florey presented the absurd claim that Valentino's body remained in a shed awaiting burial which I proved false. In 2003, I visited Campbell's Funeral Home and it was then I discovered the shipping case or sarcophagus which was found still sitting in the same mortuary where the coffin was received in 1926.

Collector Bill Self confirmed this with images of Valentino's coffin, inside the case, being off-loaded from the funeral train by the mortuary workers. This is how Bill Self found the case before I told him where it was.

Contrary to Robert Florey's grisly, false tale, Valentino's coffin was safely taken to the same mortuary where the shipping case was found by yours truly in 2003.

I first share the account from Florey's “Inoubliable, Inoublié, Rudolph Valentino Survives His Legend”, which Renato translated from the French and which is included in its entirety in our book The Rudolph Valentino Case Files, I excerpt page p. 103-104 from “Installment #4” as it appeared in Cinemonde #1160 on 11/1/1956. 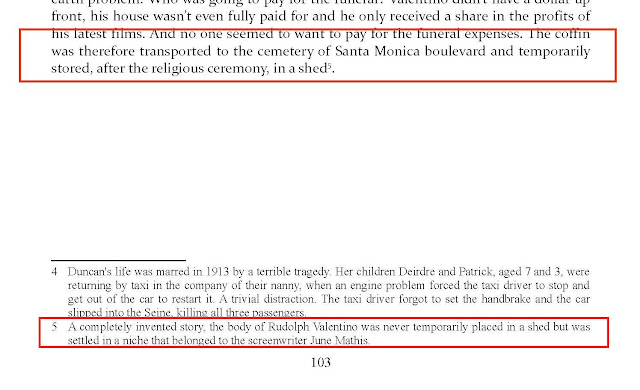 And in Jeanne De Recqueville's book, she includes a letter she received about this from Alberto Valentino in which he again denies Florey's account. Alberto's comment on this is in italics. 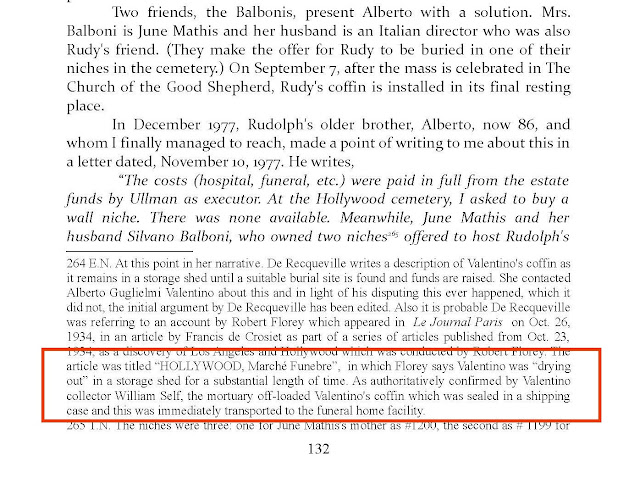