Norma Niblock's scrapbook was a great source for me and I included images from it in the book. She meticulously cut and pasted articles making sure every line was included but seldom included the newspaper citation and date. Fortunately, I found most of the articles and most were from the local Toronto papers. Some of the articles were unique and insightful; especially those covering her interviews. In one more memorable moment she described Rudolph Valentino's voice which I still find mesmerizing.

“Norma and Mabel granted an interview at home for a reporter from The Toronto Star. Norma admitted she was never particularly interested in Rudolph Valentino until the previous night at the Arena. That was before she heard Rudolph Valentino speak.

'When I heard him I thought he was a poet', Norma said seriously. 'You know he had such a wonderful voice and he used such beautiful language'.”

This fascinating video (see below) becomes all the more magical for me in light of her comment:

Norma's archive includes many photos of the Mineralava pageant including this one where she is no doubt listening to the “poet” who is using such “beautiful language”: 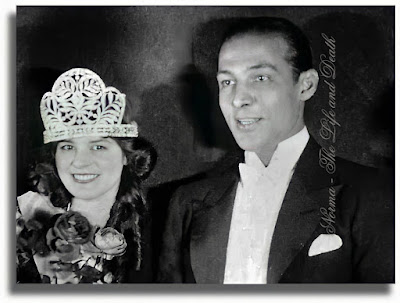