When I first published Affairs Valentino in the spring of 2011, it was shortly removed from Amazon with a notice I was to “work it out” with those making a claim of defamation against it. Of course I was defaming no one and telling the truth. I think those who pulled that off, have long since proven me 100% correct in accusing them. Ms. Martin even made a public claim to having Affairs Valentino removed from sale at that time. Even though she was then no where to be found. Again prompting the obvious question...who is she?

There was nothing untrue in the book and the case against it was fraudulent because “they” claimed the person publishing the book was the author and responsible for the content. She never was. They will howl and whine a wholly different version of events as they do with everything concerning Affairs Valentino. And in his panic to bury the book, Tracy Terhune even submitted a deposition to the court referring to the publisher as “self-publishing” my book. Impossible. It was and still is my work.

Now the publisher had other books in print and “they” did not go after them. The shameful and obvious attack on Affairs Valentino was a calculated scam to prevent people from ever reading the truth. The entire and documented story of this will be shared. But "they" have more than proven me correct over the years by sharing their malicious motivations and still do every day.

During the time frame that Affairs Valentino was available, a few thoughtful reviews were written and I share a few excerpts from one by Tony Bonn, who then had a newsworthy commentary blog called "The American Chronicle". His insight on Valentino is interesting.

For example, his saying Valentino wanted to "transcend his materialistic morass", and his dividing Valentino's legacy into three "distinct periods". I am not sure I would agree, I think the advent of the internet would begin the "third period". However it is thought provoking. I did not know Mr. Bonn personally and had one exchange with him to ask permission to cite his fine and very lengthy review on the back of Affairs Valentino. At some point I will put his entire review on a Google document and post the link. For today I post a few excerpts. 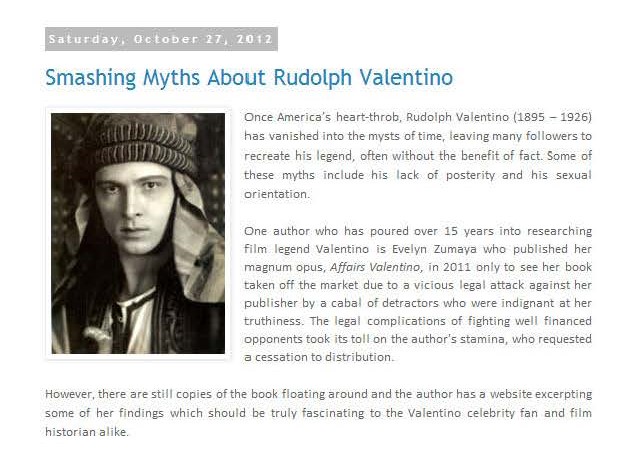 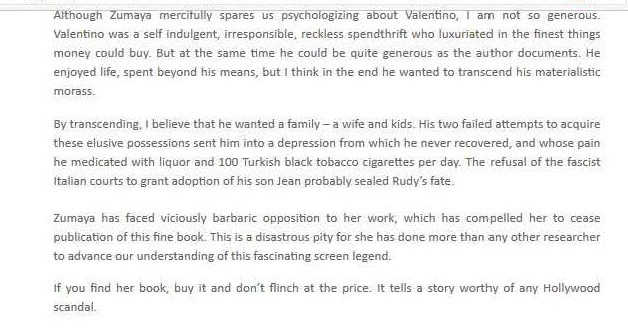