This Was His Purpose

I mention this woman because I think today the women of Bollingen, who conducted such important research, have faded into the past. This said I feel they still deserve acclaim and recognition. I have yet to read Buffie Johnson's life's work Lady of the Beasts: Ancient Images of the Goddess & Her Sacred Animals (see link below) but have decided I will buy a copy and see what her field study was about.

Her affinity with Natacha's life work is obvious and it is easy to appreciate their friendship. Both women were so passionate about their deep study of iconography, symbolism, religion and searching for a commonality in the world's cultures through belief systems and spiritual art and ritual.

Michael Morris contacted Ms. Johnson hoping he could interview her about her friendship with Rambova for Madam Valentino. This is the letter he received as a reply. I know he would want it shared because his goal was to have his entire archive shared. This was his purpose in publishing Beyond Valentino...he wanted to publish as much as he could from his archive. I will ensure it is all public as he wished, as this is the sacred work which has been tasked to me.

Buffie Johnson passed away in 2006 but her letter to Michael presents another first-hand and valuable insight into Natacha Rambova's true personality. 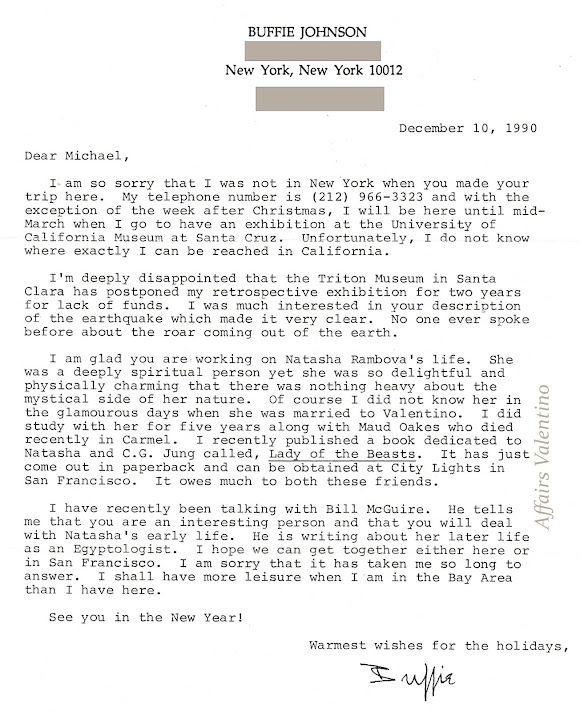