A comment @ 1:53 on the previous post mused whether a scene where Valentino and Claire Del Mar might have danced together could have been cut from the film.

I can't dismiss that possibility because scenes were cut from The Four Horsemen of the Apocalypse. From The Coshocton Tribune, October22, 1926: 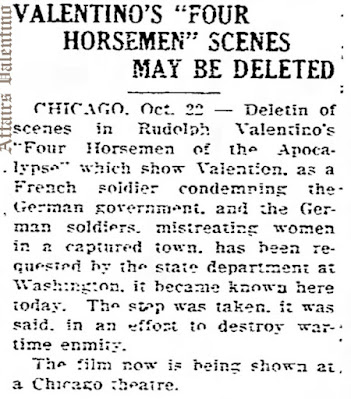 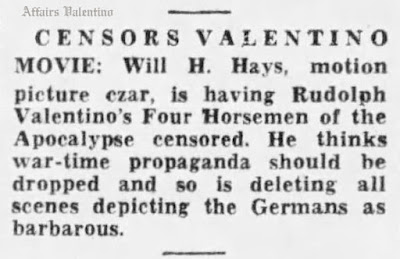 And in regards to the comment in previous post @ 2:48, I cite from The True Rudolph Valentino, p. 57-58:
"About that same time, Rudolph fell in love with several women. Some corresponded with him and with some he engaged in intimate affairs. Among these are women who today are happily married to notable characters on the screen and in society. Others paid little attention to him.
But perhaps none had as much disdain for Rudolph as Gloria Swanson, whom he was madly in love with at the time. Once he borrowed money and spent it on flowers and chocolates to take to Gloria. The story goes that she threw the flowers and chocolate in his face and hit his nose while slamming the door."
at April 14, 2022