I Can Not Fathom

I still receive vicious comments to be posted here. I read just enough to recognize them and then toss them. After all these years, I recognize who is writing; for example Terhune loves the words, “Crackpot” and “deranged” and will not miss an opportunity to call Renato a few names. I would say there are not more than 3 terrible people submitting their hatred. Sad folks really, who are so determined to harm us and obviously motivated by jealousy. What miserable days they must spend.

Can I just say that I have never been so jealous that it became a destructive force prompting me to set out to ruin someone I was jealous of and their livelihood? What a colossal low life someone would have to be to be capable of something like that. I can not comprehend how someone could be so full of self-loathing that their envy of other people was so great, they act out on it in cruel and spiteful ways. I can not fathom a state of mind like that for one second. And by “low-life” I do not mean poor or needy, I mean cruel, “deranged, crackpot” level disturbed.

Because in order for them to feel good about themselves, they must make anyone perceived as competition a source of ridicule and shame. They, Terhune, Hill and such... are no different that the little jealous children who stick a piece of paper on another child's back, so they, unaware become a joke. Decent people do not laugh at such things. And in this case it is no different.

Tracy Terhune, Donna Hill, “Cindy Martin”, Eleanor Gribbin, Constable et al.... must know by now we are no joke. And that no matter what they write or say about us, they can never change who we are and never diminish the true value of a thing we do. Dream on haters, we are not the crackpots.

I found the list below the other day and thought I would share it so the Valentino Liars Community can know more about what they deny and why they persecute. They deny all of this and much more. They deny and banish the mention of every single point on this list. It is such a shame they do not share all this new information about Rudolph Valentino and more....and shameful they can not do so in a positive and truthful way. 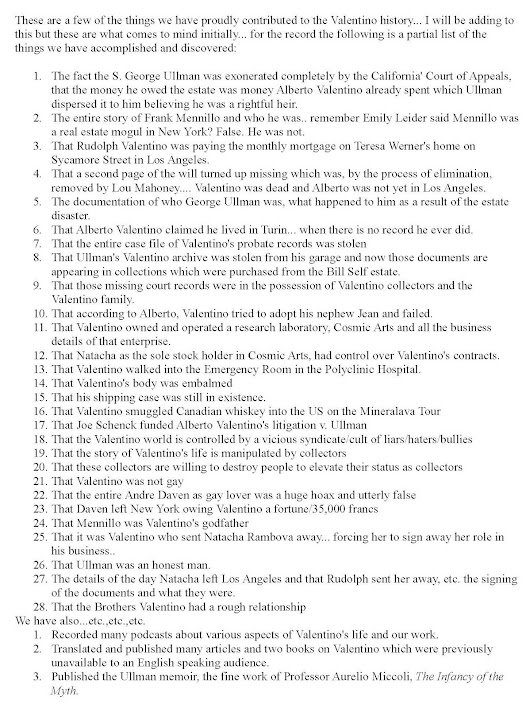