Even mentioning “gay tendencies” imo is tremendously homophobic. The other day one of the “team” sent me some hate mail and used that term about Valentino. What does that mean anyway? I say it means, antiquated gay stereotypes; destructive, dangerous stereotypes.

Who wrote that to me? The same people who call me homophobic for pointing out that Valentino was not gay. What does that have to do with anyone being or not being homophobic? It is history and a correction in Valentino's history based on data.

On this blog I fight for my survival against a thankfully small group of idiots dedicated to silencing me. It is not that they just do not like our books, that would be fine. It is that they ally, conspire and act out to burn all our fine books and our reputations. That will not stand.

Various reasons why, but the main reason is that I said hey... after years of serious research I discovered Valentino was not gay. Big deal? Oh for them it is. And then I worsened my situation when I called them out for being homophobic because they wield hate and homophobia as their personal, frivolous weapon to generate hatred and spark outrage against me and my loved ones. Their fake outrage is not about being against homophobia, it is about silencing a critic. FYI, If you cross David Bret at all for anything, he will be calling you homophobic online in about five minutes.

I have been transparent about who I am, my past and this made no difference. Their strategy was to make me hated and the fastest way to do that was to call me homophobic. David Bret posted banners touting himself as being against me/ homophobes, “the only good homophobe is a dead one”... while he and his pals, feigning to rout out true homophobia call me endless homophobic slurs such as, “fat lezzie, sapphic meathead, etc.”...on and on...and my gay friends, “Liberaces”, etc.

We spent years capturing screenshots, filing lawsuits, but to no avail. Onward they go... day by day...now spinning their homophobia into trans-phobia. They mock my husband for wearing a robe when we lived in Morocco by calling him , “the man who wears a dress”. Really? For me that is proof of a very high level of hypocrisy on their part.

Of the books I have written, the one they fear the most is the one below. Because while they were calling me homophobic, I published Buddha's Tooth and Morphine with my friend Wayne (as Ethan Jack)... his true story of being gay bashed that sent him on a journey of recovery which ended tragically.

Do those who call me homophobic for saying Valentino was not gay, ever mention this book which they know I wrote? No. never. Is it about Valentino? No it is not. And yes, I wrote it under a pen name to protect my friend. Did this work? No it did not. David Bret found the book in his obsessed trolling and tore into a vicious campaign against Wayne, adding to his suffering with endless claims he was a pedophile and went to Sri Lanka to abuse boys. How homophobic is that? Let me inform the world that David Bret is no champion of the gay community.

Truth wins. This little book is still online. I made an Instagram account for the book under the title which I have yet to do much with. Wayne is no longer. His wild story lives on. 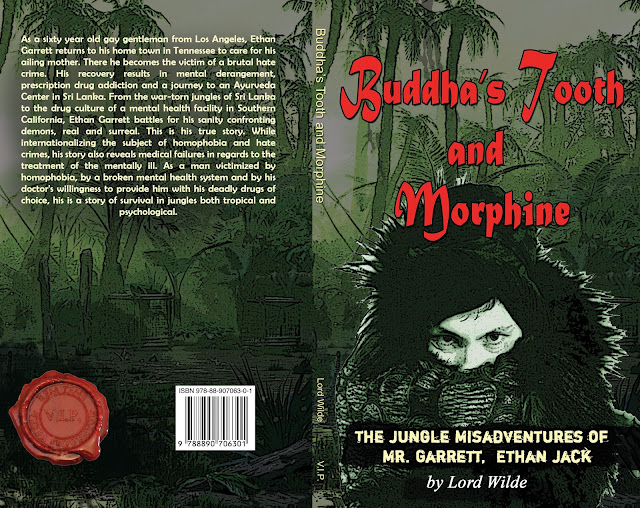