Regarding The True Rudolph Valentino

But their viciousness shines through in every line and their grasp of anything “literary” is so weak a newborn baby would have more of a grip.

I guess if someone hits someone over the head repeatedly for ten years with a book, that could be considered a “critique”. But its not funny and not a legitimate critique demonstrating a hint of intelligence.

Terhune allies with David Bret in their trash banter and mocking on that blog and they do so after ever single book we have put out. It is one thing to criticize one book, one a few times, but to do so with every book and never stop for years on end, skulking as predators in wait for a new book from us...that is a pretty sick and sadistic obsession.

Terhune here (see images below) again calls us liars and claims we just made it all up. (Does that not seem rather revealing as far as what they do goes?)

Renato translated, The True Rudolph Valentino by Baltasar Cue and published it for the first time in English. Of course Terhune and Bret were frothing and came at it and Renato for his effort.

Terhune is pitifully wrong in his millionth attempt to make us look awful, smear our good names, spread his innuendo when he says we claim that Rudy and Cue were collaborating just to fit our "narrative". In trying to portray us as people we are not, he fails. But he is wildly successfully in making himself look ill-informed, petty and cruel. His spitting mad “review” of The True Rudolph Valentino opens with this:

He then follows with this stunning display of ignorance on the entire subject:

David Bret than adds the following to this "review":

I cite as source confirming the collaboration between Valentino and Baltasar Cue, the Doctoral Dissertation of Jeanine Villalobos. I add she says she relied heavily on the Cue book:

Excerpted from the dissertation of J. Villalobos, p. 18:

“Alberto said that Cue was a house guest at Falcon Lair in 1926 and that Rudy was cooperating on the series just before his death, giving Cue access to many personal documents and photographs (some of which are reproduced in the articles). In long California afternoons, Valentino, Manuel Reachi, and Douglas Gerrard (another close friend of the star) shared their reminiscences with Cue. After Valentino's death, Reachi, Gerrard, and Alberto Valentino continued to assist Cue. The articles that resulted from this collaboration are remarkable, offering stories and photographs that had never been published elsewhere. Subsequently, much of Cue's information has been substantiated, and my documents verify even more, which leads me to place a high degree of confidence in Cue's claims.”

Alberto's acknowledgment and support of the collaboration revealed in his letter included in the Cue book: 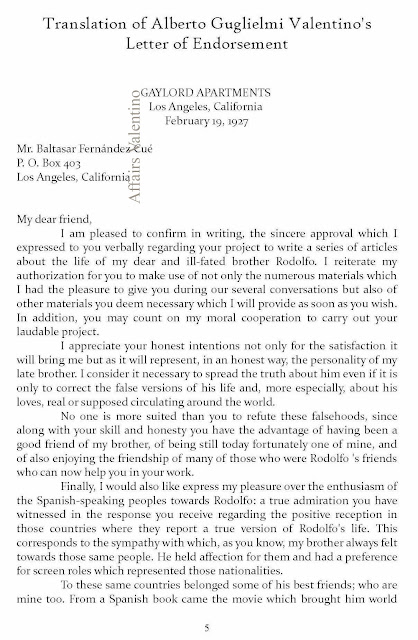 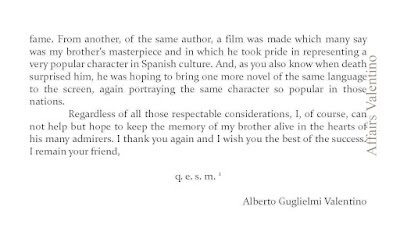 And the original in Spanish: