Thanks but No Thanks, Mean-Stream

An fyi regarding those haters who continue to bombard this blog with evil comments. I do not, and never will aspire to be a part of or partner in their delusional belief that they comprise some “Valentino mainstream”. Based on the behavior of this “mainstream”, I would say it is more of a “Lamestream” or better said, “mean-stream”.

I guess according to their logic, if they could silence me and forever, if I stopped defending Renato and I against their idiotic lies about us and our work....then peace would reign in the Valentino world. I beg to differ. Peace would reign in Tracy Terhune's world. He is the one riled up issuing the orders. And based on his actions towards us over the past decade and counting, I would venture to say that no one in the history of the world has ever hated a book more that Tracy Terhune has hated Affairs Valentino. That is a real no-brainer.

The issue is that over the years since I first made the book public, I was proven correct on almost every point I made. No where is this more true than in my coverage of the theft of those Valentino court records, the shady cover-ups and subsequent thefts that occurred and the absolute, general bull-shittery that goes on. That is why Tracy Terhune hates Affairs Valentino so very much. He hates his own truth.

Some twelve years ago I was invited to Turin to speak at the Convegno Valentino, an international conference organized and hosted by the University. A week of speeches ensued, including mine. But those “lamestream/meanstream” personalities, who work so very hard to demean, impugn, defame and torture us... were not invited and did not bother to attend. I saw no Tracy Terhune, no Donna Hill, no Eleanor Gribbin, no David Bret and no Simon Constable. Crickets from their "lame-stream" corner of the Valentino world.

The book of the speeches delivered that week was published in Italian and maybe someday we can translate those because some were interesting. Some were fairly banal imo. But all I believe are still important in the Valentino history.

And when this book (see below) came out, David Bret led the "lame-stream" call to claim it was “trash”, “homophobic” and that we had something to do with it being published. For the record we did not. 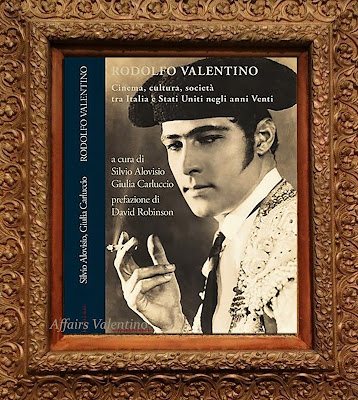