The Obvious Connections Made

I am and always have been blessed to have brilliant people in my life who encourage me and give me advise in this awful situation which we have been forced into since 2010... forced into because I wrote Affairs Valentino, because I revealed truths which our detractors long tried to deny. Because I discovered materials they tried to keep hidden away such as the 1975 Ullman memoir, those court records, etc. I thank those folks who tell me to stay strong, ignore the hate comments sent my way and fight on for our truth.

In regards to Donna Hill being affiliated with Bret and Terhune and their insidious bullying of us, I share the following. Evidence proves she is.  I do not judge how Donna Hill writes a book, or her books ... I judge her on her intellectual honesty. And in this I have every right to comment and defend myself.

Renato wrote her the following regarding an exhaustive listing of every single Valentino publication, throughout time, which she includes on her website. Donna Hill never gave him the courtesy of an answer, offered no explanation to him and still does not include any of our books on her list. Renato wrote the following as a private e-mail to Ms. Hill:

Donna Hill never replied, but instead passed Renato's letter on to Tracy Terhune and David Bret so they could use it as  material to further mock Renato and taunt him on that hit blog Terhune runs under my book's title.

To illustrate my point, I excerpt the following from a much longer, snide, vicious diatribe from Terhune which he titled, "You're Not on the List" accompanied by a cartoon saying "Crackpot!": 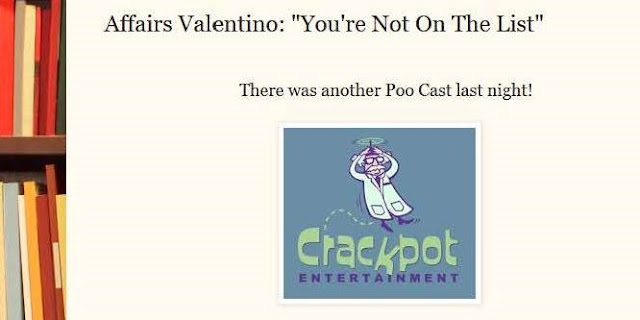 On that blog, Terhune provides a platform for David Bret's obscenities about us, which is in violation of a court order and also allows Cindy Martin to mock Renato. Contributing anything to that hit blog, i.e. Ms. Donna Hill, is complicity.  www.zumayawinslawsuit.com

Terhune's vicious name-calling my husband, "Child Star"and the regular postings about us by David Bret, speaks volumes as to Donna Hill, Tracy Terhune and David Bret's true intent in all of this. These people work together, have for many years and do so today with that blog online.