Cut Out of the Same Cloth

Do the administrators of We Never Forget and Mad About the Boy know David Bret hides behind all those million and one aliases on their groups? I contend they certainly do. I have documentation, which I have posted previously on this blog, that Tracy Terhune was passing information to Bret for his use on his killing blogs... as far back as 2010. And at that time, Terhune was asking Bret not to reveal he was the source of the information.

In 2019, Cindy Martin said all the defamation Bret writes about us for Tracy Terhune to post on his designated hit blog he runs against us, has to first be read and approved of by Terhune. So Terhune thinks Bret's disgusting and death-laden lies about us are acceptable? Apparently so. David Bret, David Spurr, Edel Man, Edel anything, Etienne, Nicole, Joey, Mrs. Trellis, Albert Bastista Morris and etc., are all the same person and I will add Tracy Terhune, in his endless complicity, to that list as being the same person as Bret.

Terhune hid any affiliation with Bret for years, even swearing on an affidavit that before 2010 he'd never heard of Bret. Fat chance of that. But a few years ago, Terhune and Bret became good buddies as Bret refers to it. “It” being their coalition from hell, their death-laden mocking of our ages, the “tick-tocking” by Terhune and his gloating that no one will “miss us when we are gone,” etc. etc,

So Terhune and Bret, what is the expression I am looking for... are “cut out of the same cloth”? It is frightening to me that the coalition of Terhune and Bret can create such a situation on those two groups for people innocent of who they really are. There is a reason readers of this blog post as “Anonymous”. A serious reason. Terhune allows Bret run about masked on his two groups at the risk of unsuspecting people. I think Eleanor Gribbin posting warnings about how Bret is not allowed on the group is completely fake. Just to let people know they would never allow such a fiend to be present. He always is and they know it. What is wrong with that? A lot actually.

Mad About the Boy and We Never Forget are “Bret-infested” and the administrators are perfectly aware, imo. Not minutes after I posted my previous post about Valentino and the piano, David Bret tweeted the following. (see below) Sad, isn't it? Not sad because his attempt to be witty failed so miserably. I guess the skeleton is obviously me. Zzzzzzzz. (How many death references about me can that man make in one lifetime?)

But sad... because this crap is tacitly approved of by Tracy Terhune and that should demean anyone's opinion of both men in a big way. And as a reader suggested to me I should probably say the following to Death Bret, “Thanks for making me the center of your world.” Wow.

But I want him to realize,  I am in great health and will not become a skeleton for while. And even if I did, so what? Is there something wrong with that? But I do not find death hilarious and his years of death images do not frighten me, nor intimidate me. His cartoons and skeletons are stupid, boring in their predictability and are more testimony of a sick, sad mind. 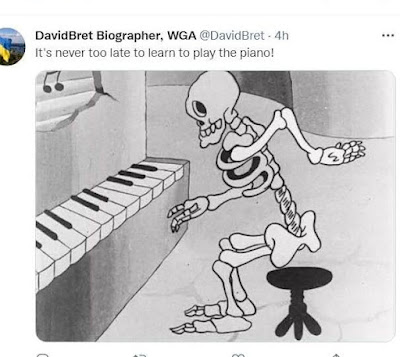