“There were thousands of pictures sent to me and to Edward Small, who was then one of the most successful independent producers of motion pictures. He had declared his intention of producing a motion picture about Valentino’s career. One such photograph was sent to Small by Alfred and Lynn Fontaine, the famous actors who had appeared in many Broadway stage successes. They wrote that Anthony Dexter not only resembled Valentino but was also an excellent actor, having appeared in a play with them. Mr. Small signed Tony Dexter to a long term contract and spared no expense to have Dexter trained in dancing, fencing and horseback riding. He engaged voice teachers to try to get Dexter to simulate Rudy’s voice and others to teach him to walk and assume Rudy’s screen mannerisms as much as possible.

Other producers, sensing a possible quick buck, also issued announcements that they were preparing screenplays based upon the life of Valentino. Mr. Small announced that he would base his production on my book “Valentino As I Knew Him” and engaged several prominent writers to prepare screenplays.

I talked with Mr. Small on several occasions and tried to make him understand that there had to be more to a picture than the bare outline in my volume because there was a spiritual aspect about Rudy that should be an important ingredient.

But, even though several very excellent screenplays were presented to him, he and George Bruce, a writer friend of Small’s left Hollywood for Palm Springs to write their version of the Valentino screenplay. I read this before production began and vehemently told Small that it was very bad.

But he went ahead anyway and the resulting picture was almost amateurish. The “star” Tony Dexter, tried to emulate Valentino, but the result was rather pitiful. This picture lost a lot of money for Columbia Pictures Corporation who had financed and released it, and caused the almost total oblivion of Tony Dexter, who really was a competent actor.”

** I think most everyone interested in Rudolph Valentino knows plenty about Ed Small's production of “Valentino” the movie released in 1951, starring Tony Dexter. I shared the excerpt above because George comments on something which has always haunted me. When he writes, “...there was a spiritual aspect about Rudy that should be an important ingredient.”

I do not think George meant religious spirituality, or an occult spirituality. I have thought about it over the years and think he meant there was something cosmically spiritual about Valentino. And I do not mean the Carl Sagan literal space cosmos; I see it as being cosmic. The definition of cosmic being, “relating to the universe, distinct from the earth, inconceivably vast”. Maybe George meant Rudolph Valentino was larger than life.

The most unfortunate and audacious pretender to the throne, Alberto Valentino stands as perfect evidence of exactly what George Ullman was saying. He was not a “cosmic” presence, not larger than life and I think Ullman made a serious point. 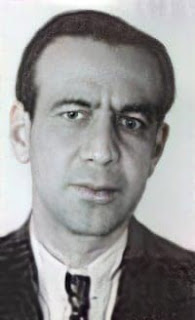 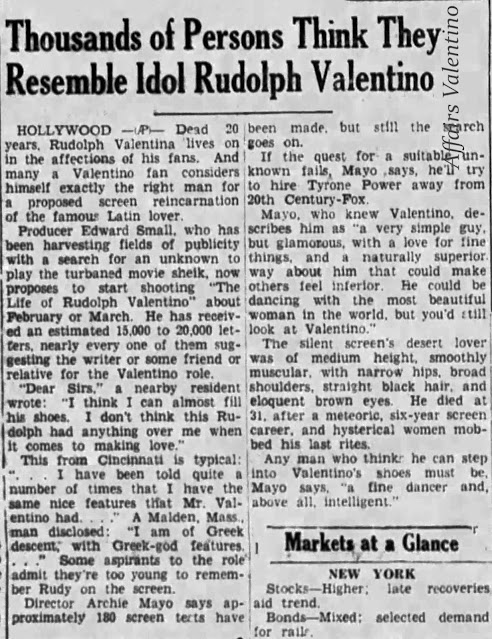