In regards to letters and their importance in Rudolph Valentino's legacy, there are some more letters worth mentioning. These were letters written by Andre Daven to his girlfriend Yvonne Legeay. While Daven was in New York, attempting to smoodge his way into New York society on Valentino and Rambova's dime, he wrote to Yvonne back in France about his situation.

These letters would not see the light of day until Jeanne De Recqueville was asked to appear on a French television show on December 12, 1970, called, “Autopsie d'une légende - Pourquoi des millions de femmes l'ont-elles pleuré”, (Autopsy of a Legend – Why Millions of Women Cry”. She was invited to sit on a panel with other Valentino experts including Yvonne Legeay, who knew Valentino.

At the time Jeanne DeRecqueville was writing her Valentino biography and of course the two women hit it off. Yvonne Legeay gave Jeanne De Recqueville those letters from Andre to read and she cited them in her book.

Those letters told a story quite contrary to the phantasy laid out by, and still clung to by, the Valentino “mean-stream”. Daven complained to his lady love that Natacha got him a used typewriter and paid him 50$ a week to do some clerical work.

Bearing in mind the handyman at Falcon Lair, Lou Mahoney was paid $40.00. I think knowing those weekly salaries reveals a lot about the hierarchy and importance of the help in Rudy and Natacha's world. Daven was help.

The letters told about his hunting trip with Valentino where they killed and skinned animals. And all in all it was nothing so extraordinary. Except that later on we find out Valentino kicked Daven to the curb for stealing his money to the tune of some 35,000 dollars.

Well the point is that Yvonne Legeay contributed a substantial correction in Valentino's history. Andre Daven was no longer a priviledged guest and he and Valentino did not part ways over a "lover's quarrel". Renato added to Yvonne's contribution when he found some riveting articles in the French archives and translated them. They told a rather crazed account of Andre Daven's love life, messy break up from Yvonne and more. I excerpt the Andre Daven blog where we shared all this material at https://andredaven.blogspot.com/

and the posts about Daven's love life are mostly from December 2019.

I guess we have to feel grateful for that panel discussion back in 1970. Those ladies put it together. A bit in regards to Andre and Yvonne's love affair from the blog....

“Yvonne Legeay was seven years older than André Daven and would claim in court that when she met him, he was broke and working as a gigolo and that it was she who financed their home and supported him. They both had expensive tastes and their home was finely appointed.

When they broke up, Yvonne moved out and into a new apartment on the Rue Magellan and André refused to allow her take their commonly-owned furniture. Somewhat remorseful, he agreed to pay for a year of her rent and agreed to assist her in furnishing her new apartment. They were off to Poiret's Maison Martine where they placed an order for some 45,000 francs worth of fabulous furniture including lamps, carpets, throw pillows, etc.

When the bill came due in the summer of 1926, André had just returned from a trek to Africa where he was bitten by a tse tse fly which infected him with a debilitating sleeping sickness. He slept for most of the summer of 1926 and would contract pneumonia which further complicated his recovery. Meanwhile Yvonne phoned Daven's office in Paris and his secretary agreed to write a note to the furniture designers assuring them André would soon be awake and pay the 44,860 franc invoice.

When André did wake up, he was livid with the news and said he had no intention of paying for the huge order. (Sounding reminiscent of his telling Valentino he owed him money for time lost) He and Yvonne fought, things turned ugly and both retained lawyers to set in for the long haul which it turned out to be. André's lawyer arguing he had only given Yvonne advice in her selections of the furnishings and Yvonne saying he bought it all for her.

Daven argued he gave Yvonne a ring worth 120,000 francs and she argued she never saw such a ring. So it went until 1932 with Daven determined not to pay for Yvonne's furniture. The case ground its way through all eight levels of jurisdiction in Paris with the court eventually ordering both Yvonne and André to pay Paul Poiret's house of design, 44, 860 francs.

Meanwhile, André had fallen in love with Danièle Parola; a beautiful performer at the Champs Élysées Theater. By the time he was embroiled in court with Yvonne and waking up from his tse tse fly slumber, he was already in bed with Danièle Parola and obviously very much in love with the young beauty because they would marry on June 21, 1927. Rolf de Maré acted as their best man and André and Danièle (below) would live together as husband and wife the rest of their very long lives.” 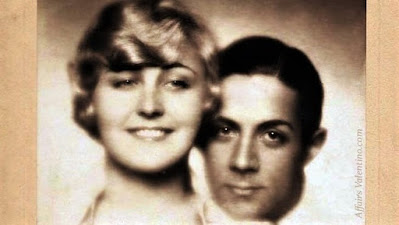