Where Could They Be?

A main resource for Affairs Valentino were those court records I discovered. With those thousand pages, I was able to fact check what everyone was saying. Just imagine if the entire case file was made public. How frustrating and actually illegal that is to even have those in one's possession. I knew when Donna Hill told me the case file was purchased from a collector for one of Valentino's shirts by the Valentino family, that those valuable records were probably lost forever.

Tracy Terhune admitted he knew of three people who had them in their possession. Donna Hill admitted she knew two. Really? I would think they would both want to report that to the County Clerk at once and get those Valentino records back where they belong.

The records I found are so informative and just as an example look at these two perfect documents from the file. They are from the Falcon Lair household ledgers, during the first 6 months of 1926. 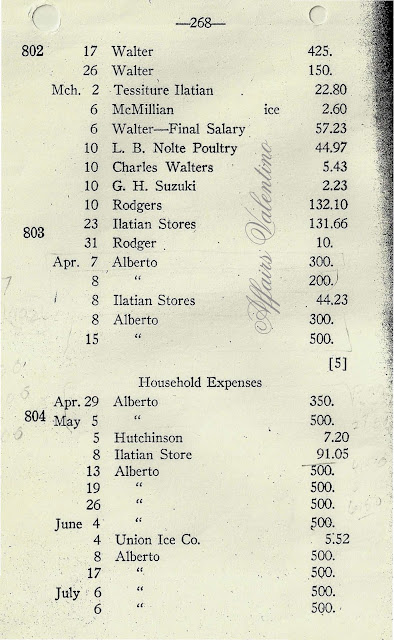 Above: I see that the court clerk can not spell "Italian", that Rudy Valentino bought his ice from the "Union Ice Co., that he was dishing out gaping amounts of cash to his brother Alberto, that chicken was purchased for the falcons from L.B. Nolte Poultry and that the Italian (Ilatian) Store was doing a swift business with Rudy. 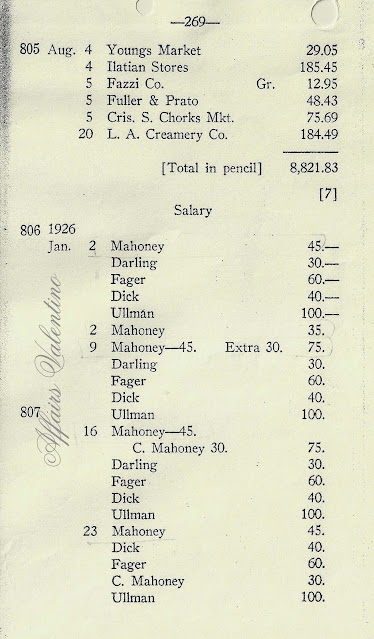 Above it is itemized that Lou Mahoney made $45.00 a week as handyman at Falcon Lair. His brother Charles took home $15 less a week. Rudy's secretary Raymond Fager made $60.00. I always thought this debunked Lou Mahoney's grandiose opinion of his role in Rudy's household. Not quite the picture.

So imagine if Terhune and Donna Hill decided to report that stolen case file and make it available. And imagine if Donna Hill had not told me about that? But in the least the documents I tracked down make a difference. I found them all so informative. I will at some point have them uploaded to an online archive for posterity.