Oh, the O'Thieving by Shady O'Bannon

For the record I think it important for me to state the following here, in my defense and for posterity:

Throughout 2003 while I interviewed Valentino memorabilia collector Bill Self, he taunted me with several things he claimed he had in his collection. One of them was the original contract Valentino signed with United Artists. This contract assumed a place of importance in the separation and divorce between Rudy and Natacha. Self told me he had it somewhere and as I would leave an interview, he would promise to have it for me to read the next time I came to visit him. He never did.

So imagine my thrill, when I first went through the Appeals Court records of George Ullman's case, after searching for them for one year, to find that contract was included. I read it a few times to realize one glaring point; Natacha was not mentioned at all. This was a complete contradiction to the then belief that she was banned in the contract. She was not.

She was not included in the contract which was the problem and the banishing of Natacha was done by UA head Joe Schenck in a private memo. This was revealed in the 1975 George Ullman Memoir, which I found and we published. I was also given non-transferrable and exclusive rights to that memoir. (We also shared the entire contract in the Affairs Valentino Companion Guide and online.)

I guess to most people this all did not seem like a huge discovery but I think it was. It changed the history on that one point. Imagine my fury one day to learn that Ms. Cindy O'Martin was carrying forth in her Facebook forum telling some star-struck follower how she researched for years before finding the copy of the United Artists' contract and that she discovered Natacha's name was not mentioned. And then going on with her revelation that Natacha was banned in the memo, etc.

If she neglected to mention that I found that out and years before and published it all in Affairs Valentino, it might have been considered an oversight. But she bragged openly, taking credit for my treks to the libraries, my trips to see Self, my finding and interviewing the Ullmans, and much more.

Cindy O'M. did not discover any of this, and I repeat she did not discover that Natacha's name was not in that UA contract and she did not find that copy of that contract. Etc. And her dispatching her offspring to chastise me and accuse me of "bullying" Mummy by even mentioning such a thing is outrageous BS. She has never issued an apology or a clarification of the facts of this matter. Plagiary is a serious subject and considered theft.

I wonder how many times she and the other VSC (Valentino Studies Community) / "team" members have stolen my work while spreading lies about us as fast as they possibly can and taking joy in trying to ruin Renato and I completely. I just wanted to make it clear that they do this. (see previous post, "From Renato") The list is long and they have no shame in using the very material they trash everyday to try and look smart. i.e., Terhune telling someone one day how, breaking news, Rudy actually sent Natacha away. He knew I wrote about that for the first time in 2011 in Affairs Valentino, the book he delights in calling “pure fiction”. Hardly.

And Happy Valentine's Day everyone... many a chin chin to this fine and eternal subject. 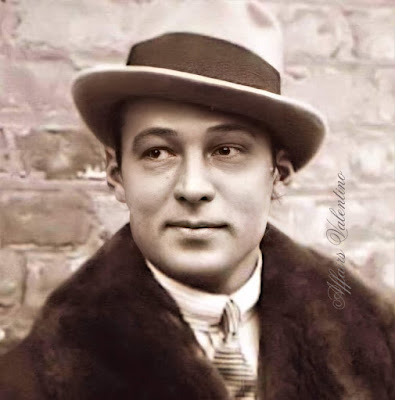