I can not thank all of you for your support and brilliant insights shared here. I also wanted to say that I have of late been receiving a steady stream of hate comments (from those you-know-whos) which I will never post. Why would I?

I guess I could scarcely have done a better job of igniting all the hot spots in Valentino's false narrative. In the story I unraveled, villains became heroes and heroes villains. This caused the exposure of a true black marketing Valentino cult with a leader whose followers' devotion is such it appears to be brainwashing... imo akin to something like David Koresh and his Branch Davidians.

Of all the villains to heroes revelations for me was discovering Natacha Rambova was being 100% misrepresented. I found the rabid hatred of her is still based in raging misogyny and sexism. “A woman's place is in the home!” they cry. “Why did she not bear his children and learn how to make spaghetti?” What idiots. They should all shut up and go away.

Apart from learning about Natacha's wholly different personality, I discovered her career accomplishments are still considered epic. Her life with Valentino was but a few years and she lived on for decades. How very far she went in her field of Egyptology.

Natacha' Rambova's life in the 1950's was the exotic dream of expeditions into the desert, working long days in an Egyptian tomb wearing the pith hat and khaki. A movie was produced about her time there, setting it many years prior, but The Valley of the Kings, is Natacha Rambova to me. And btw in the movie she has an illicit love interest whose name is oddly, “Mark”.

Throughout the late 1940's and into the mid-1950's, Natacha recorded and transcribed the entire tomb of Ramses 6, then moved on to do the same work in the museums of Cairo.

She then took her experience and knowledge from her years in Egypt to develop her theories even further, tracing commonalities between spiritual traditions through symbolism. She returned to New York and began to write her master thesis titled, Cosmic Circuit. She connected the dots with a ground-breaking theory and an expansion on the unifying principles of symbolism and language. Her work still stands as relevant, iconic and is housed in the University of Yale. https://egyptology.yale.edu/yale-egyptian-collections

Her life's master work has never been published in its entirety but I was proud to have negotiated publishing some of it in Beyond Valentino. Michael was communicating with an Egyptologist in London to be able to include some of Cosmic Circuit in Beyond Valentino, being determined to expand on Madam Valentino in regards to Mallorca and Egypt. After he died I set out to find that manuscript he was trying so hard to secure.

I discovered another copy at Yale but there were delays in getting me copies (they were calling me with apologies for not sending me the manuscript pages Michael wanted from their expedition camp in Egypt). I looked elsewhere and finally found an entire copy at the University of Utah. I have some crazed idea we could publish Natacha's thesis, but it is twelve volumes long and a highly technical scientific work.

The two Egyptologists from Yale did contribute to Beyond Valentino. They sent an essay as analysis of Natacha Rambova's Cosmic Circuit and if you want to know the technical level Rambova achieved in this field, try and read one paragraph of their essay. Natacha Rambova was the Albert Einstein of Egyptology.

So one of the hate comments I received yesterday said kindly that I was a “textbook case of madness”. Well... I laughed. If I am that, then how else to be?  It reminds me of one of my favorite quotes by Salvador Dali,

“The only difference between me and a madman...is that I am not mad.”

Thanks again everyone for making this blog an intelligent and spicy place to be. 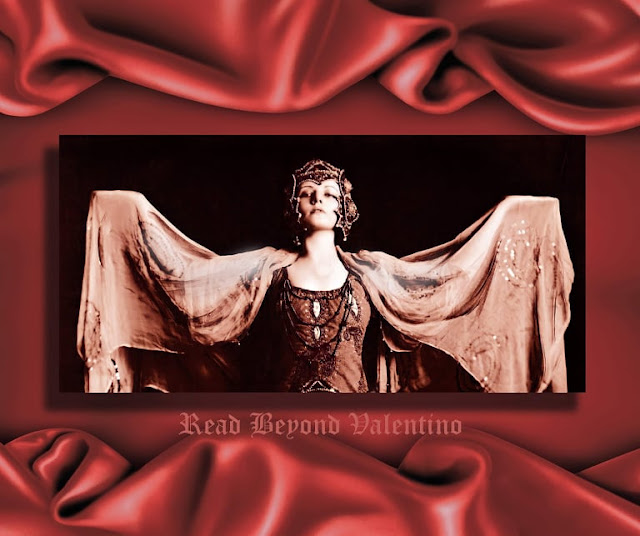