The letter I share below was written by Natacha Rambova from Mallorca to her cousin Ann Wollen. Ms. Wollen gave it to Michael Morris and it is now a part of his archive (or raw data as he used to call it). I was given legal custody of the archive shortly after Michael's death and am pleased to say I have been contacted many times by legitimate Natacha researchers. I am always eager to share the materials. I will be posting the archive online at some point and still find it interesting to read some things again for a new perspective.

In this single page of Natacha's letter, I found her to be light-hearted, humorous in writing about the “back-house” used as a toilet and her description of the simple home where they were living at the time to be charming. Contrary to the erroneous portrayal of her as a cold-hearted woman, she seems to be amused and carefree here.

I never expected to spend so much time learning about Natacha Rambova. But with Michael's death, she became my subject while I finished his book, Beyond Valentino and went on to write Astral Affairs Rambova. It was such a privilege.

For all of the wickedness targeting this queen, this letter stands as proof of her true personality, revealed for posterity as she typed these lines one day in her Mallorcan home. She brags about her husband Alvaro and tells her cousin, Ann that she and her puppy “Bimbo” are “living the quiet life”. I am happy this little document survived. I really am. It is her essence. 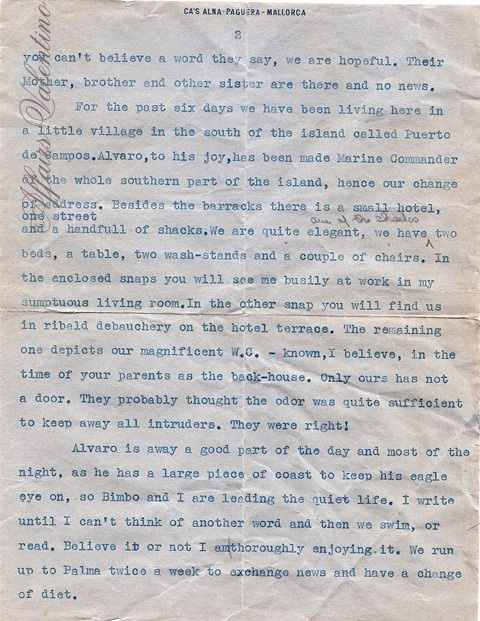