In the Name of Valentino - 2

I received a comment chiding me about name-calling. No one can ever, ever call me out on name-calling and especially Terhune and Bret ( that “Valentino Studies Whatever”). I could call them names for the next ten years, every single day, twenty-four hours a day and barely be breaking even with those two. Bret can do nothing but name-call and in 2010 when those two began on me, they ran rampant.

I must emphasize they are still at it, but since then there has been some awareness about online bullying... not much... but back then I was called things they would not dare today. My friends, my family and loved ones, my Dad, Michael Morris were all savagely name-called and in sexual ways and in posts which are not appropriate for posting here. Some of those are public record as court's evidence which I filed in the defamation lawsuit I won handily v. Bret Batista Morris.

The hubris of them and their lackys to even try to act wounded by me at this point is colossal; epic hubris on their part. Shall I begin to post all those corpses having sex images Bret found so funny to post the first couple of days after my Dad died? Or perhaps all those images Terhune has posted for me of madwomen, satan, toilets, pigs and bibles? Enough said. So the two of them just might have a little bit of it coming back their way because karma is a bitch. I have had enough and am not taking it laying down anymore.

They are, to quote my dearly-departed friend and mentor Father Michael Morris, “The Devil's Brigade” and “Satan's Angels”. After all this time people are angry about and disgusted with what they do and that includes me. It stands to reason some arrows will be flung their way. It is so deserved.

So me calling them names? I have barely gotten started. I fight back.

From the archive (Fair Use Guidelines)....Terhune's, "Literary Critique": 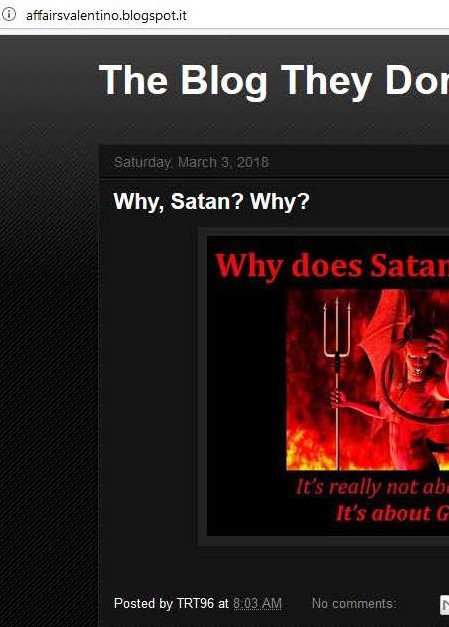 And a poem (below) Bret wrote to me when he heard my father died. He began a highly-sexualized theme of incest and so traumatized me it pains me still to even think of my father's death. David Bret deprived me of any sane mourning for my own father. I apologize for the grossness and believe me it is a huge file under the heading of “My Dad” and every entry is more obscene than the last.

“When it comes to sex, Evie's brave,
She keeps her dead dad in a cave,
"I know it's disgusting,
But he only needs dusting,
And think of the money I save!"
When alive, his hole was so tight,
He could keep those cheeks clenched all the night,
But the sphincter Zumaya
Is now mashed papaya,
Just like tonguing a bucket of shite!”

And some general posts from the file:

Bret doxing me by posting my personal information. I had to change my phone number.

For a while Bret posted on his many blogs that I lived in "La Bella". It came up in a search he did on me because I posted a picture of the Falcon Lair driveway as it merged onto, "Bella Drive". And Bret wrote a book on Valentino and did not recognize the address? Here he is going after my Dad again.