In 1965, Valentino biographer Irving Schulman wrote the following (see below) and I can not help but point this out, as I have done a few times, because it is astounding to me he faced a great deal of the same opposition and BS as we do now. Fifty-six years ago... and this could have been written today. I have transcribed the commentary for those of you who use translators. Here follows from Irving Schulman:

“...The private individuals who assisted me prefer to remain anonymous; what they had to say about Valentino was certain to be resented by the professional keepers of the myth whose big fat mouths froth at the use of published photographs, printed materials, and citations that can be documented.

In addition, I must note that in the summer of 1964, I was scolded by a group of oviparous females of both sexes, who among the intellectually underprivileged of Hollywood are much admired. The tips of their brown noses aquiver, they chided me for not liking movies. I deny their silly charge. I don't like bad or poor or pathetic or maudlin or silly or stupid or banal or pointless or meretricious or wearisome movies; nor do I like movie magazines, gossip columnists, or any of the truck with which these lickspittlers are associated. To compound my heresy, I hated The Singing Nun which starred Debbie Reynolds, and after seeing this movie I can only conclude that Louis B. Mayer is alive in Argentina.

But even if I didn't like all movies, I submit that a comprehensive abjuration of this soporific would place me in the company of many perceptive men and women of good purpose, all of them able to distinguish fact from fancy, reality from myth, history from legend, religion from idolatry, substance from imitation spun sugar; for they are beholden to intelligence and not to stupendous colossal stupidity even when it is presented with a cast of thousands and is-Lord, help us-popular and profitable as entertainment. Signed, Irving Schulman” 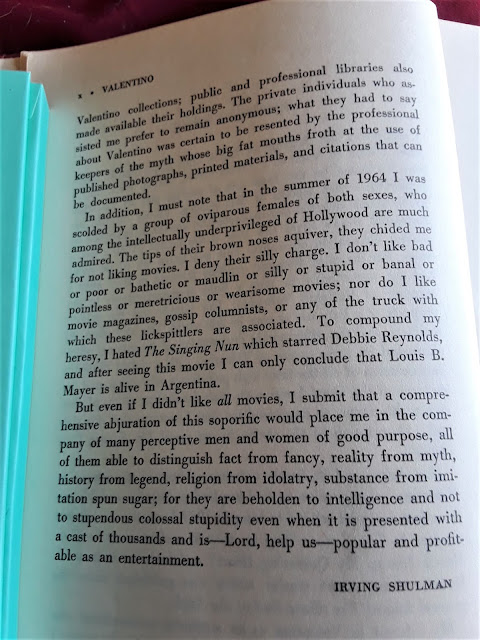