A Point to be Made

Natacha Rambova's cousin Ann Wollen, told Michael Morris that Aunt Teresa Werner would not sue George Ullman and did not approve of the action by Alberto because Ullman had children to support. She made that clear. Ms. Werner would certainly have participated in the lawsuit v. Ullman had this been Natacha's wish.

Teresa Werner's role in the legal proceedings both in the lower court and the appeals decision, is interesting because she did not oppose Ullman. But her being one of the beneficiaries of those allowances Rudolph left...technically made her a part of the proceedings. Here (see below) her lawyer explains to the court why Ms. Werner is not there and how she is “not actually a party to any of the proceedings coming before the court.”

I think this stands as evidence not only of the moral character of Teresa Werner but of the lack of animosity between Natacha and George Ullman. There was none. When Natacha published her Revelations after Valentino's death, there is a reference in her manuscript to “Dear George”. And neither lashed out against the other publicly.

I believe all of the Natacha and Ullman “feud” was and still is fictionalized to vilify both of them. Here, Teresa Werner has her lawyer argue that the best thing to do is to settle up the issue of the advances when the estate was finally distributed when Jean turned twenty-five. I think this one point is important and won't let it be lost in the mess of lies out there about these fine people. 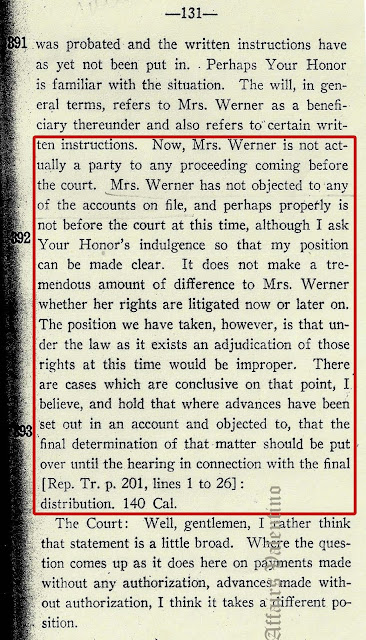