I think both Natacha and Rudolph separated and divorced deep in anguish believing they could just move on. It did not happen. She was heartbroken and furious he sent her away and cut her out of Cosmic Arts and she made many statements claiming he wanted her to stay home and eat spaghetti. I used to think the press invented her saying bitterly that, “You can't eat spaghetti every day”. But there is something to that.

She did not limp away defeated and for a while she battled back to have a show career of her own. It did not happen.

But according to those with her at the chateau when Rudolph died, she was destroyed by his death and I think she did have a nervous breakdown. The reports from the chateau of Natacha and Rudolph's reconciliation via their love lorn cablegrams during the last week of his life... has been further confirmed by Baltasar Cue.

The Cue book reinforced so much and his mention of Natacha's cablegrams under Rudolph's pillow said it all.

She did not leave Rudolph happily or in my opinion willingly. But as I learned they would have had another go at it if he lived. It did not happen.

And the reality of what had just happened prior to the parting scene at the train station is one of my proudest discoveries. Bob Ullman realized reading the court records how that all took place on his second birthday. Go figure.

Here (see below) Natacha bristles at theaters exploiting her divorce and refuses to appear on stage after one of Rudolph's movies. How could any one in their right mind claim theirs was a platonic marriage? 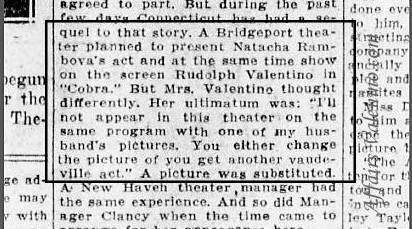