Of all the good and bad bandied about in discussions about Rudolph Valentino, would his clever tactfulness with the press be considered good or bad? I guess in this one instance, (see below) if you were Pola Negri it would not be optimal.

Valentino had an interesting rapport with the press I think. And sometimes I wonder if even half of what is attributed to him by the press was true. I was once interviewed for a show I worked on and was blown away reading the article. The free-wheeling reporter put a lot of words in my mouth which I never said and it made me cynical about news coverage ever since.

Was Rudolph Valentino an artful dodger and distracting a reporter with some witty banter? (see below) Or was this the truth? Here he is flanked by his manager Ullman and United Artist's publicity head Charles Moyer and I wonder if this was a talking point agreed upon. How free was Valentino to speak his mind? 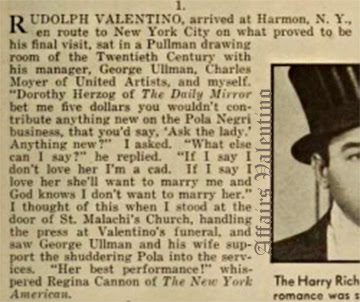