Responding to Some Grade A Innuendo

Simon Constable is truly a one-note Johnny... slathering his innuendo once again on Ullman. I ask why. What does he have against this man?

He never offers a tiny explanation as to why Ullman would be so cruel to plant the Pink Powder Puff editorial and publicity is not an answer. Does anyone disagree that at that time Valentino needed no publicity as he was fairly drowning in it? Does anyone disagree that the one topic Rudy would never have agreed to use as publicity was the subject of his being effeminate? Never. Are we to believe Valentino agreed to having his father insulted?

Every aspect of Constable's concocted version of events is ridiculous. Shapiro would know much less than George Ullman and everyone else in Valentino's actual inner circle at the time who were first hand witnesses to the situation. Ludicrous. There were almost countless witnesses testifying to the opposite. This is a prime example of Constable cherry picking things out of context to create a false scenario. And he does this while attempting on many occasions to take credit for my discoveries and while banning even my name from the Facebook group so I could not respond or comment. (see below)

I think Constable is obsessed with impugning Ullman (and Mennillo) because these are the two men whose families I discovered and met with. I had exclusive access to their family archives. I found the Appeals Court records and told the story according to court records and for the first time.

The only reason Constable stays on this one, in my opinion, is to gain favor with Tracy Terhune and the Alberto Valentino family. God help us if he ever decided to get off the, “Get Ullman” band wagon and do some ground breaking research on a new topic...such as investigating where those court records are today, why they were stolen and by whom? There is a mystery he should really and heroically sink his teeth into and he might begin by interviewing Jeanine Villalobos, Tracy Terhune, Donna Hill, Sylvia Huber and Jim Craig.

In the course of researching a book I am currently writing, I did uncover new facts (not hearsay) about that Pink Powder Puff editorial and Constable's smarmy innuendo will look pretty idiotic when this is presented. I would invite Constable to review the entire body of evidence in Ullman's story and not just search desperately for anything he can use against him. I think this says much, much more about Constable than Ullman.

Why would Ullman engage in anything which could affect Rudy in a negative way as this clearly did. Anyone implying that Rudy was in on this is fairly insane. In my opinion this is Constable brand crap innuendo served up with Terhune salivating all over it. It is getting boring and really obvious.

What a shame these awful people, who ban all of the new documentation we share openly...are permitted even the tiniest presence in the Valentino community. Their motive and intent is to assassinate the very people Rudy loved most and their efforts stand as a tragic vestige of the resentment of Alberto Valentino. (Below evidence of the true motive behind these assaults on Ullman and Mennillo on Mad About the Boy) 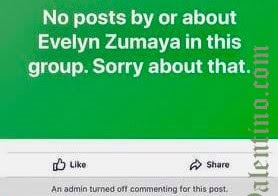