The following (see below) is an article translated by Renato which we found interesting and amusing. Valentino's arrival in Deauville! From the La Dépêche – Journal de la démocratie – Toulouse on Monday, August 27, 1923:

Deauville, August 26 - The kings of the screen are like heads of state. When they move about, they do so with a great deal of luggage, accessories and of course automobiles as obligated by dignity and publicity.

The great star of the moment, Mr. Rodolfo Valentino, who is currently our guest, arrived in Deauville in the middle of a procession of three cars; heavily but distinctly loaded.

In the first car were the three dogs of the star and a police dog, which Mr. Valentino bought in Paris.

In the second car rode the young actor with his wife, Mrs. Natacha Rambova and two of their friends.

The third car carried the luggage and in particular all the paraphernalia needed to cause a sensation on the fashionable beach: flannel outfits, authentic Panama hats and white shoes of all shapes and in countless numbers.

For a European gentleman, this does not seem very normal. But for the champion of the screen, it is without doubt, this sartorial luxury which provides this young screen ace with so many declarations of love that he needs four secretaries to answer them all." 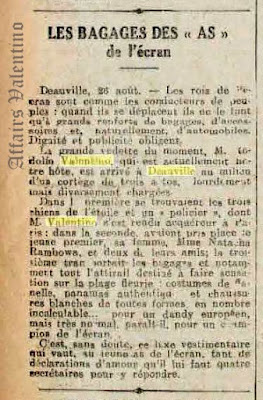