The Merits of Her Claim

I think not enough attention is paid to how Natacha's Aunt Teresa Werner was treated by Alberto Guglielmi after Rudolph's death. I knew nothing about that before I found Ullman's Appeals case file. It was all there; how Rudy was paying her mortgage on her home in Los Angeles and how Alberto moved legally to have her stricken from the instructions Valentino left regarding her continued support.

George Ullman says he contacted Ms. Werner and advised her to travel to Los Angeles to defend her rights. At the time she was in France. She did return and testimony reveals she did not participate in Alberto's lawsuit v. Ullman.

But the story was told in the appeals records through testimony from her attorney and accounting which revealed Ullman did disperse money to her.

What always surprised me was that it was clearly outlined in Valentino's will that anyone disputing the will would make that version null and void. This would mean that the prior will leaving everything to Natacha would be  reinstated as the valid will.

Alberto challenged Ms. Werner's presence in the will and objected to Ullman advancing her any money. Here (below) I share just one snippet of the testimony where Alberto's attorney James Scarborough speaks with the judge questioning Ms. Werner's "merits" as to her claim. This was a major issue in Alberto's lawsuit v. George and one I think has received very scant mention over the years. Scarborough argues that George Ullman should have had an order from the probate court to give her any funds despite what Valentino outlined for her in the event of his demise. 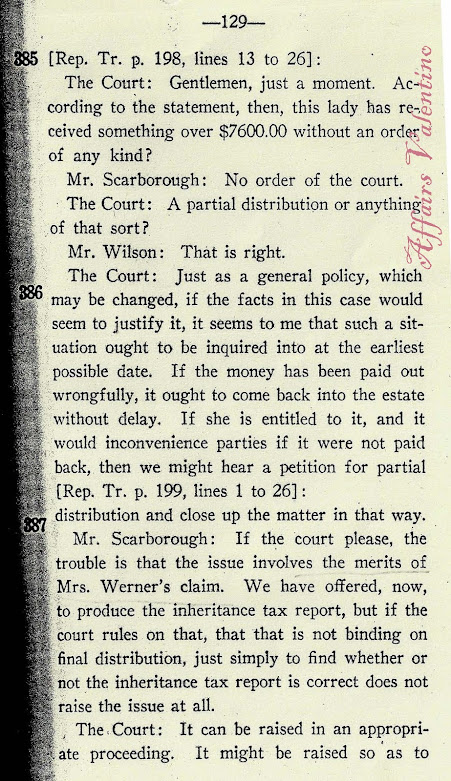