In the previous post, Natacha Rambova is remembered as being an "actress". There really are so many descriptions of her professionally which would be far more accurate. The one which comes to my mind would be "Egyptologist". She is still highly respected in that field and as I learned her work has not aged or lost its relevance.

In negotiating the materials Michael Morris hoped to include in Beyond Valentino, I communicated with three renown Egyptologists: Rosalind M. Janssen, author of "Rambova and Piankoff: Tying Up Loose Ends", Göttinger Miszellen, 156, (1997), and Yale Egyptologists, Colleen Manassa Darnell and John Coleman Darnell. They have all been instrumental in granting Natacha the recognition she has long deserved and in 2012, she was included for the first time in Who Was Who in Egyptology.

I found this little Obit which in the least grants her a broader description of her vast life's works and accomplishments. 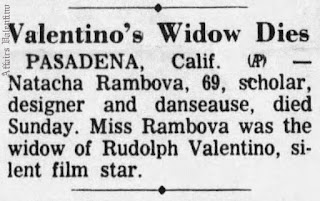