An "A" in Penmanship for Rudolph

Yesterday I posted images to prove that the calling card given to Federico Betran Masses by Rudolph Valentino and Natacha Rambova was written by Natacha. It was not a major point but I mentioned it because Natacha's handwriting is very recognizable, as is Valentino's.

One of the points I made was that an Italian would never write a "7" as Natacha wrote on the little card. I share below an excerpt from one of Valentino's "Letters to Bruno" to show his Italian "7". 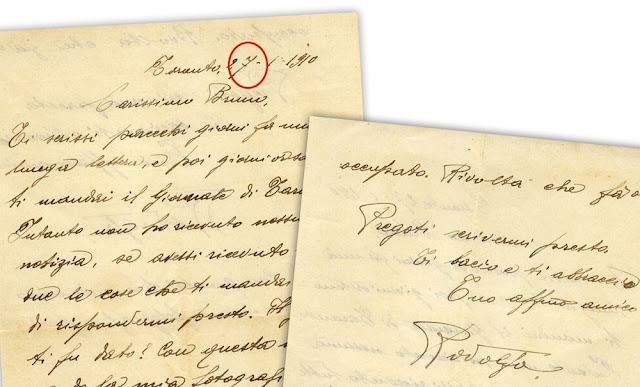 I have lamented many times over the state of the "Letters to Bruno" as imo they are extremely valuable artifacts relating to his accurate history. In The Rudolph Valentino Case Files, I shared the story and images of one of the letters a young Valentino wrote to his friend Bruno. I only learned about it from a follower on Instagram who contacted me to say they bought it.

I was stunned. This was someone who made Valentino collages and I was fearful that was a plan. And this person had no idea what the letter said and knew nothing about its history. We translated it, told them about the history and they agreed to allow us to share it in the book. But the plan imo is this... that the collector who owns these artifacts sends those that prove Valentino was having sex with women into oblivion as fast as possible. It is, imo an act of profound destruction of Valentino's truth.

Because in the letters Valentino tells his friend he has contracted something from the "signorini" or street walkers. All of these artifacts belong in a museum to be cared for by professional curators and conservators. And this stands as one of the most distressing aspects of researching Valentino... the hoarding, secreting and straight up destruction of artifacts.

They accuse me every single day of what they do. But their accusations are in fact just their confessions.