Well Valentino collector Bill Self kind of slipped up here in this e-mail. He seldom sent me e-mails and would always call.. to I guess avoid something like this happening. Or did he want this to happen?

Here (see below) he tells me that the Alberto Valentino spokeswoman Jeanine Villalobos was in receipt of the stolen case file of Valentino's probate court records and has the gall to tell me that this is, "where they belong".

Hell no Bill, those records are public record and belong in the Los Angeles County Hall of Records for all to see. Now Self's e-mail was confirmed of course by Donna Hill when she told me the same and added that Ms. Villalobos exchanged one of Valentino's shirts for the case file.

Bear in mind George Ullman's son Bob...at the time was a few weeks from his death and wanting to know the truth about his father's tenure as executor which was contained in that case file. Hence why I was trying to find those records for him. Bill Self knew that... and still they hid those records from a dying man.

Bill Self told me he waived the purchase of that shipping case/sarcophagus he is mentioning in this e-mail...when in fact I would learn later on he already owned it. 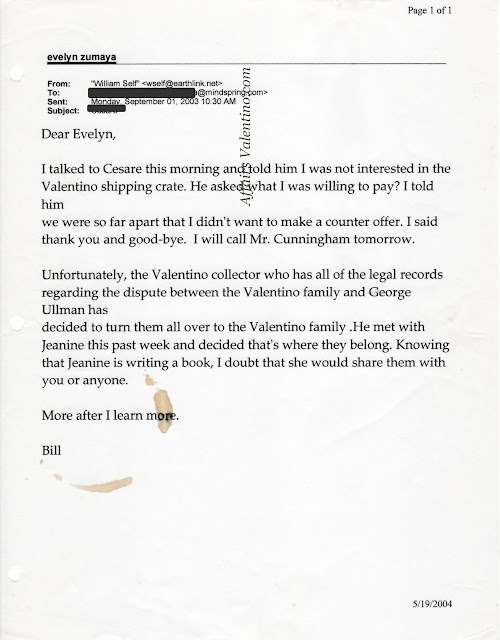