I received the following message (with image below) and thought I would share it here as I found it interesting. I did receive permission to post this and thank the author for the insight.

"Oh my goodness! I don't know how it is that I just now ran across your podcast "Valentino's Moment of Opportunity" but I can say it is one of my favorite ones. I loved your analysis of how the timing of his fame was perfectly aligned with the birth of radio becoming commonplace in the average home, the new media of radio as a vast marketing tool for advertising, the discovery of King Tut's tomb, etc. Fascinating how all of that played into the timing of his skyrocketing fame!

I'm a big Elvis fan and have read every book I could get my hands on about him. I can see many eerie parallels between Rudy’s and Elvis’ lives. Let’s start with Elvis’s moment of opportunity. Elvis's fame can be attributed to perfect timing just like Rudy’s. He was a white, southern boy who was raised near poor, black areas. He grew up listening to black gospel music and really became infused with much of that sound. So, when this nice-looking white kid who sang like a black man arrived upon the scene, it was an explosion yet unseen in the white music world. He and Rudy both rode the wave of fame because the perfect storm of timing thrust them into the center of it.

These two men each enjoyed collecting expensive cars, driving fast, were avid horsemen, owned many dogs, and had reckless spending habits which forced to them to accept work that they really didn’t want to take. But this is only the tip of the iceberg of what they had in common. Rudy and Elvis both had a unique sense of style. Elvis dressed like no other, sang like no other, moved like no other. Rudy was an elegant dresser who wore jewelry when most American men did not. The media insulted him and questioned his masculinity because of this.

Rudy and Elvis were both criticized for corrupting American youth and were denounced by “proper” society. Rudy’s passion and sensuality on screen was something that did not exist to that degree until he came along. Along with his sensual lovemaking on film, Rudy inflamed women’s desires with the sexy Argentinian Tango. Gasp! Hips and thighs touching during most of the dance! Such filth! Thirty years after Rudy’s death along came Elvis Presley with his suggestive, swiveling pelvis. His dancing was also called immoral and sinful he was blamed for the downfall of American youth.

They both had immense charisma and influenced American culture in a way that is still pretty much unmatched. Both were known for their impeccable manners and for being polite. Both men wanted to be serious artists but were trapped in roles that they were unable to break out of. Rudy was not at all happy about being known for The Sheik and especially did not want to make the second Sheik film. Elvis was trapped in movie contracts in which the studios churned out utter crap. This was deeply disturbing to him. His natural acting ability was never allowed to fully develop and was tragically suppressed. He received critical acclaim for his role in King Creole and was highly praised for Jailhouse Rock but everything to follow was complete trash.

Rudy and Elvis were both highly spiritual men. Each one was on a spiritual quest and had an unquenchable desire for knowledge outside of accepted religious norms. Rudy’s search led to the study of metaphysical topics such as manifesting and the Law of Attraction, communication with spirit guides, numerous visits to psychic mediums, and a belief in communicating with spirits via automatic writing. Elvis was a voracious reader and poured over many spiritual books. One of his favorites books was “The Prophet” by Kahlil Gibran and he owned several books by that author. He studied Eastern religions, Kriya Yoga, meditation, theosophy, psychic healing powers, numerology, and enjoyed intense philosophical conversations.

Both men were extremely close to their mothers and were 22 and 23 years old when their mothers died. The death of Rudy’s mother and his loneliness for her was a driving force in his impulsive marriage to Jean Acker. After Elvis lost his mom his life took a different trajectory, and not for the better. I can’t help but wonder if Gabriella Guglielmi and Gladys Presley had lived long enough for their sons to reach middle age if both men would not have died so tragically young. The entrapment, pressures, and isolation of fame caused Valentino and Elvis to cope by turning to prescription drugs (Elvis) and alcohol (Rudy). Would this still have been their default coping mechanism had their mamas been alive? Two beloved, unique, and talented individuals were gobbled up by the double-edged sword of fame." 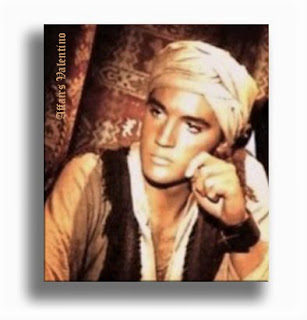