One of the more interesting little details which I learned from those Appeals Court Records was why Rudolph Valentino included Natacha's Aunt Teresa Werner as one of three people (in addition to Alberto and sister Maria) who would receive a weekly allowance from his estate in the event of his death... until Jean Valentino turned 25 and inherited it all.

It was revealed Valentino was, at the time, paying the mortgage payments on Aunt Teresa's Los Angeles home. It is well-known he thought of her as a mother figure but I think she was included because he never wanted her to lose her home.

This small mention, was kind of the beginning of it all and Alberto was rejected by the court... as executor or co-executor and Aunt Teresa received a weekly stipend from Ullman for a few years until he retired as executor. 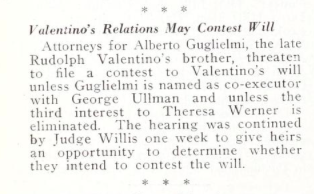