I know I have posted this letter before (see below) but I think it deserves refreshing as it relates to the previous two posts. It is striking to me how ill-informed Alberto and Jean were about many of the details of Rudolph's life and the events which transpired. When Alberto petitioned the probate court to make him the executor of Rudolph's estate, I wonder how much he did know about the business of being Rudolph Valentino. The court rejected his request and handed the task to Ullman as Rudolph requested.

Michael Morris thought Jean Valentino might sue him for putting out Madam Valentino. And it is surprising Jean Valentino was not supportive at all of Michael's project then. And the letting, "bygones be bygones" somewhat denies all history does it not? Those bygones are history and Rudolph Valentino was an historical icon and the subject of many books.

Someone pointed out to me that while Alberto speaks about demanding a retraction from La Revista for publishing the story of one "Evelyn Valentino" in 1977, he did not publicly protest Mank and Steiger's horrific book (published on January 1, 1977) nor Hollywood Babylon (first published in 1965 and banned then again published in 1975). Here Jean Valentino refuses an interview with Michael and tells him to chuck the project (Madam Valentino) in the trash and forget about it.

I also asked the Alberto Valentino family for an interview for Affairs Valentino and was refused. Not sure what they felt they gained but then again I surely would have asked about that touchy subject of the "sole heirship". 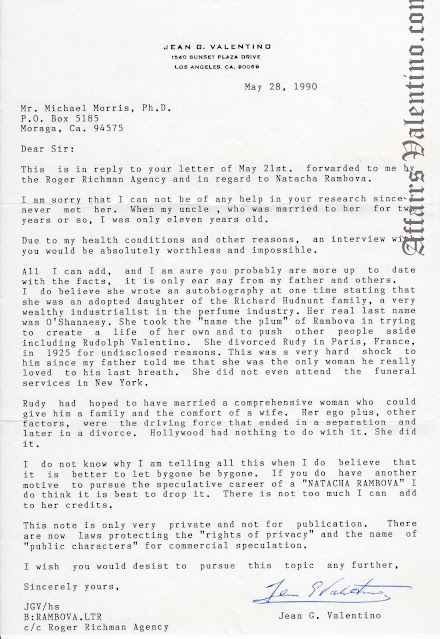