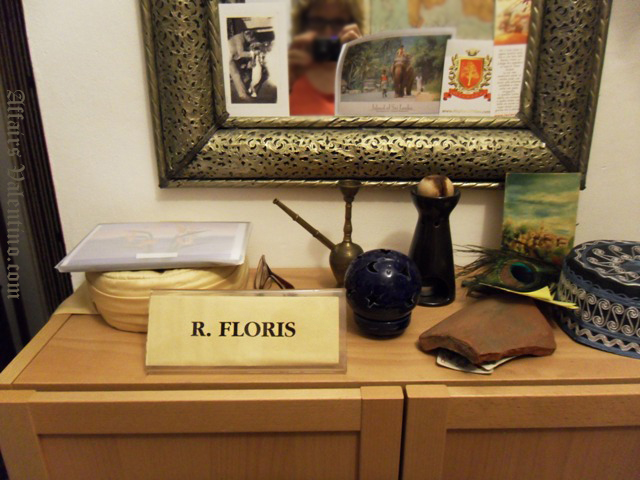 I share this image from our home, because there is a story to that piece of red clay roofing tile there on the shelf. This tile was once a part of the roof of the Falcon Lair stables. It came to Renato this way.

In the mid-1990's Renato traveled to Los Angeles as an advance production man for the Italian television RAI's production of the documentary on Valentino, “Lo Squardo di Valentino”... translated as “Valentino's Glance”.

His host and Valentino expert was Ms. Patricia Lampinen. At the time, she was known for publishing a regular newsletter about Valentino. Renato is not completely sure but recalls she lived in Minneapolis.

At one point in their filming, the documentary production team hosted a luncheon at an Italian restaurant on Hollywood Boulevard where they celebrated a sort of birthday party for Valentino. They set up this luncheon to interview Valentino fans who attended.

One of these fans attending the RAI luncheon organized by Renato was Tracy Terhune. Go figure. And he appears in one brief segment of the documentary. Renato has the documentary file and will be uploading it on our Youtube channel soon. It is only in Italian but maybe that can be another translation project for Renato... an English voice over.

So back to the roof tile...Ms. Lampinen went up to Falcon Lair during her visit to Los Angeles as would be expected. Upon her arrival she noticed they were changing the roof tiles on the stables. She managed to abscond with a few of the old tiles as treasured souvenirs. Before she said goodbye to the Italian film makers from Turin, she made sure Renato had one of the tiles.

Our little piece of Falcon Lair... from our home to yours...thanks to Patricia Lampinen.