I have been made aware of a photo which was discovered in a newspaper archive (see below). It is being alleged by Simon Constable that the woman in the photo is Bee Ullman. The man at her side he alleges to be Alberto Valentino. Not such a difficult thing for Constable to surmise  as it says this clearly in the caption.

Although the photo is fuzzy, I am not convinced the woman is Bee Ullman for the following reasons. She never wore her hair with heavy bangs all the way down her forehead and was a conservative dresser. I also doubt that in 1926 she would be walking arm in arm with Alberto. This was also a funeral train and everyone was wearing black.

Bee was also very short as we see in the photos I have previously posted where she is standing next to Bill Self.  (see below)  This woman is taller by at least 6 inches.

I think the woman could be Pola Negri who was also on the funeral train and who reportedly took Alberto under her wing and according to this image perhaps quite literally. But because of the way she is dressed I doubt it is Pola or Bee. Neither woman would be seen in public on that funereal occasion wearing a party dress with open sleeves.

In the newspaper caption it states this is Mrs. S. George Ullman but as I think we all know, newspaper reporters are not always accurate.

To me what matters most in this discussion is that I was not asked to weigh in on the identification. That seems logical to me. I have the Ullman photographic archive which Constable feels free to utilize to support his argument and again without acknowledgment. He feels free to post my images without mention where he got them and while blocking Renato and I from any discussion on his Facebook group.

And in a perfect Valentino world, Donna Hill would have deferred to the Ullman archive and asked me to verify with more images. 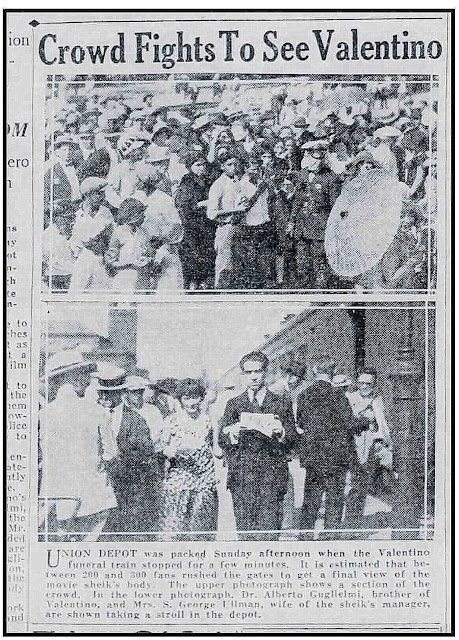 Would Bee Ullman be seen in public arm in arm with Alberto in a sun dress with no sleeves? 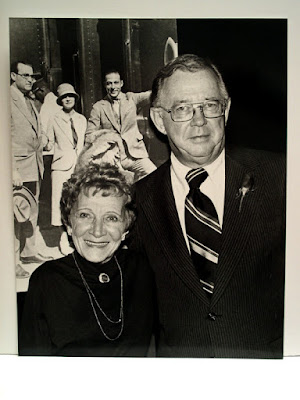 Bee Ullman with Bill Self where we see she barely is tall enough to reach his shoulder. 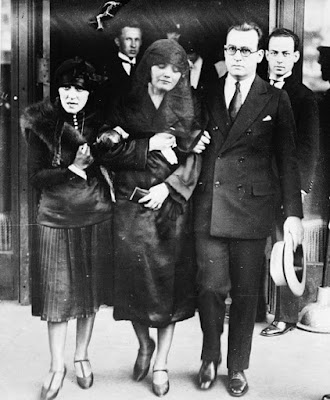 Another image demonstrating how diminutive Bee Ullman was and the style of mourning wear both she and Pola were wearing at the time. And note that Bee Ullman is wearing heels.
at May 12, 2020