So Tracy Ryan Terhune and David Bret would like (for the one millionth time)... to convince the world their forcing me to spend a decade of my life defending myself, my loved ones and our work from their barbaric assaults online is... that somehow I am bullying them. No one believes that by now...not even them. It is just their sad strategy. They have been repeating the same lies, verbatim for over ten years. The impartial judge in the Court of Asti was not fooled as to who was the victim here...when she levied her verdict against David Bret finding him guilty of defamation.

So now I hear they are whining that they have grown tired of my defending myself.. and are not about “to take much more”? Really? Take much more of what? What should I do? Remain silent and heave my books in the trash? Crawl under that rock as Terhune suggested or die soon.. as in his mention of how our time is tick tocking away?

Tracy Ryan Terhune's feigned magnanimity... oh who is he kidding? This has always been about his burying Affairs Valentino and convincing his world that we are liars, frauds, bullies and forgers, criminals, homophobic people with incestuous affairs, satanic, fools, demented, insane...oh I can't waste any more time on that. Their defaming us on Terhune's hate blog is not something new at all. And now there is more evidence that Terhune organized a campaign to censor discussion of our work, to "ruin" us and has assumed a role of censor according to a witness of this behavior, Cindy Martin.. Terhune, who even demands he proof read Bret's slimy posts before he allows him to post them on his designated hate Affairs Valentino blog. On this I received the following today:

“...What is so disingenuous to me is (Terhune) playing the benevolent forum admin, trying to bring joy into the lives of his admirers by showcasing his baubles and wares. Then he has the nerve to say that the Valentino world is big enough for everyone! What a lying POS! If anyone dares to deviate from his agenda, he instantly vaporizes them!..”

Well in these deadly times when loved ones are losing jobs and lives even.. Terhune and Bret again ally to punish us in a sick and sweeping agist, sexist harassment by mentioning family members and insulting us to a high degree and writing yes, again about our deaths.

Who is the bully here? Are they kidding?

Have I ever run a slanderous blog for eight years and counting under the title of their book.. where I deceive people into thinking they are reading official information about the book? No, I have not.

Have I ever attacked their parents, their loved ones, their family members by name? No, I have not.

Have I ever made sadistic violating comments about their bodies? No, I have not.

Did I ever physically chase someone who published one edition of their books through a courthouse and into a parking lot trying to exact a citizen's arrest while waving an expired bench warrant yelling, “You're going to jail?” No, I have not.

Who is the bully here? Not much doubt. And by the way that is a compelling video. Utah wept.

Did I ever link for years to another hate blog where their parents were written about... referring to them by their first names as they were “spinning in their graves”? No, I did not.

Who exactly do Terhune and Bret think they are kidding? I think no one actually. I think most people know by now... their claims are ridiculously utter BS. It is one of the definitions of a bully... someone who accuses their victims of bullying them if they defend themselves.... and I add....that tired old bark loaded with their feigned innocence? It sailed long, long ago.

As I referenced this in a previous post, I share one of the obituaries David Bret posted about me. This was followed by many posts and articles about my death. I add this caused my friends and loved ones a great deal of suffering and distress.

This document is not protected by any copyright as it is filed as evidence which makes it public record.. as I submitted it in the lawsuit I won v. Bret. These documents are now public record and on file in the Court of Asti. Anyone could retrieve public records for a fee. The entire case file can be viewed at @ https://bit.ly/39P8pPD

Sorry Terhune and Bret... not quite dead yet and God willing, I won't be any time soon.

Did I ever post their obituaries? No, I did not. 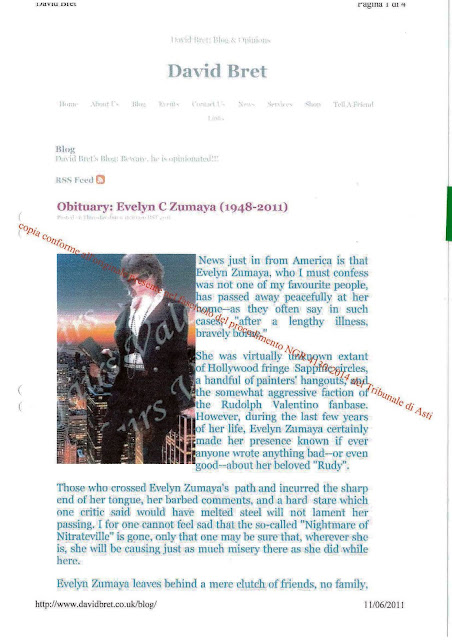