At Home With Renato and Evelyn

My publisher, best friend, greatest supporter and loving husband Renato Floris and I took this picture (below) for my grandson. He requested the photo because someone gave him a little plastic snow globe which could hold a photograph...so for the past few years we have been sitting in a tiny snow storm on the head board of his bed.

This photo was taken in December of 2011, just after we returned to Turin from Morocco. Our newly-renovated apartment would hold a surprise for us. The new hardwood floors were installed over a heating system which, unbeknownst to us had not been seasoned. When we turned on the heat, the fumes from the adhesive in the floor were toxic. We were soon refugees living with friends for a few months while the situation was remedied. I guess this photo was taken in the brief time frame after heat was turned on and before the poison air chased us away.

Leeloo looks like she has seen a ghost. Did she have a premonition? 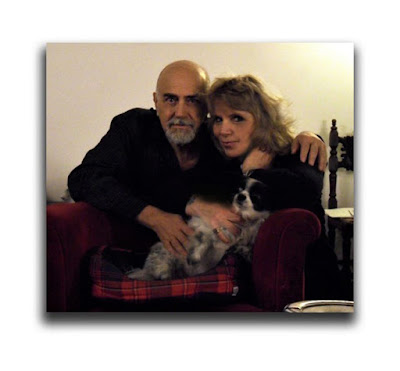