Was Rudolph Valentino almost hospitalized for a nervous breakdown during the first weeks of the Mineralava Tour? Truth or fiction? The answer to those questions requires mention of the tour's managers, S. George Ullman as the manager for Mineralava and Jacques Armand Schuel, a.k.a. Jack Curley acting as Valentino's promoter/manager. As we know by tour's end, Jack Curley would be out and George Ullman in as Rudy's business manager. But for a while it was all up to Curley to book the venues, grab some press and in one case...manage the press. He was the advance man.

Jack Curley was a heavyweight in every way; a boxing and wrestling promoter/impresario and some say racketeer. By the end of 1922, his mighty income was compromised after professional wrestling was placed under the supervision of the New York State Athletic Commission. That really cramped Curley's booking style. The impresario was broke and accepting work as press agent.

I believe George Ullman brought Curley on to represent Valentino for the Mineralava tour because Ullman was a professional boxer for a while, was a true boxing fan and surely knew all about Jack Curley's situation. Curley became Valentino's promoter, representing him on the Mineralava Tour; booking tour venues and managing the events in the manner of a sporting event.

I think the body language says it all in this image, taken at the February 1923 contract signing (see below): Rudy absolutely sold on the whole idea and thrilled, Natacha looking fierce thinking, “Oh, do not mess with me.” And Jack Curley thinking big bucks as in, “Gotcha!” 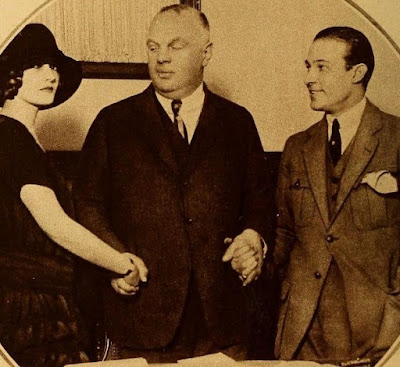 Jack Curley's lifestyle was an advantage and nearly a disadvantage. On March 10, 1923, during the first days of the Mineralava tour, Edward Smith, New York mason contractor, was hit and killed by one of Jack Curley's cars. The driver was a mechanic but the headlines were not making Rudolph Valentino's new promoter look good at all. As we see in this coverage below, neither the driver of the car or the poor victim Mr. Smith had their photos included in the article; only Jack Curley. It seemed the death of Mr. Smith was on his head because he owned the murder vehicle. (from The New York Daily News, March 21, 1923) 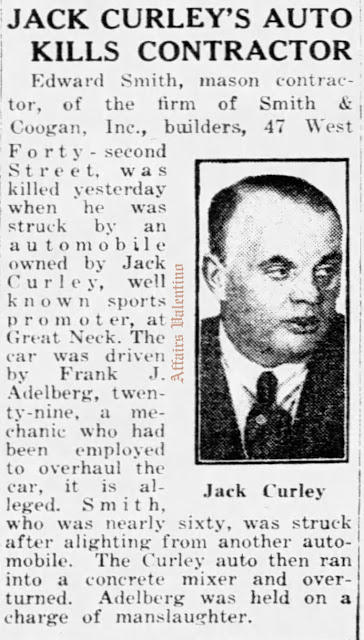 Within the next few days, a rumor appeared in syndicated columns reporting Valentino was about to check in to John Hopkins Hospital because he was having a nervous breakdown. (from The Los Angeles Evening Express, March 30, 1923) 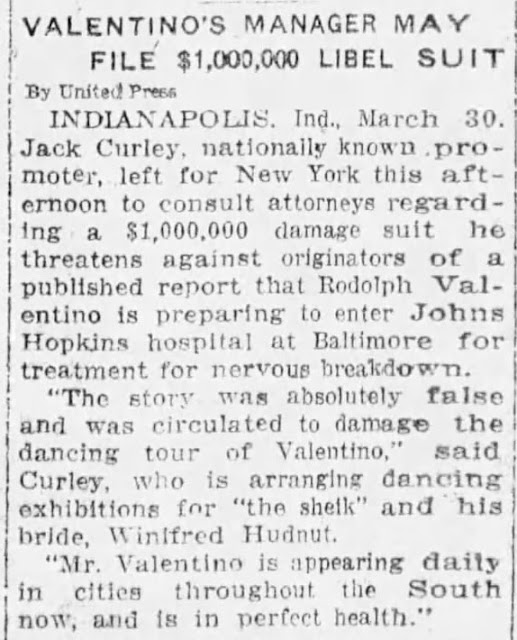 I have to wonder if someone was out to make Jack Curley pay for the death on that highway in Long Island, or if it was someone he crossed who planted the rumor to, as Curley said, “damage the Valentino tour.” I think Curley knew who was behind this attempt because his threatening a lawsuit in the amount of $1,000,000 seems a bit harsh for one rumor he could have easily just declared false.

It is probably safe to say Curley had his enemies. Being a promoter of wrestling and boxing events is scarcely the life of a Presbyterian minister; Curley had to deal with a lot of rough characters. Was he too tainted to represent Valentino? There is little doubt he knew the business of booking the sports arenas and running the events logistically, but did he have enemies? Did he put Valentino in some firing line?

Was there any truth to the nervous breakdown story? Was it just vengeance on Curley, a random rumor or fact. I would not doubt for a minute Rudy could have been on the verge of collapse at that point. Makes one wonder. Imo, I think it was a hit on Curley.