Is anyone else concerned that the man who emcees the annual memorial service commemorating Valentino's death is promoting things like this? (see quote below) Well I am. Today I received a message from someone who had just watched the piece Terhune was recommending. I asked for their permission to post the message here with the image and was given permission:

“I write this after quite a bit of wretching. The photo below is a still image from an animated film recommended today by the mighty Terhune on his Valentino forum. The name of the film is “Coriander & A Penny’s Worth of Lonesome.” The figure in the photo is - suspend your disbelief - Rudolph Valentino. Not only have the “filmmakers” concocted a grotesquely distorted physical representation of Valentino, but they have also given him a high pitched voice, made him stupid and barely verbal with unintelligible English. He is also chronically flatulent, with all the other characters remarking on it. And of course, the plot centers around a hard bitten would be actress who is hired by a UA publicist to pretend to be Valentino’s lover because - as the UA publicist says - Valentino is “a ponce” who was married to “dykes.” So to sum it up, Valentino was ugly, stupid, ill mannered, and, oh, a closeted gay man. I cannot believe that not one of Valentino’s self-proclaimed “mother bears” has stood up to condemn this disfiguration of their beloved. And where, oh where, is “the Valentino family?”

The message to me included the following image/screen capture which is how Valentino is represented in the piece promoted by Terhune. 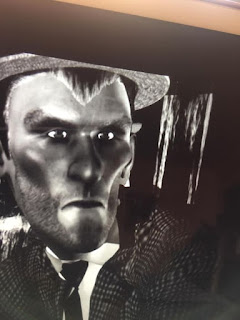 I have to ask where is Ms. Eleanor Gribbin? Does she not make a huge point to label herself Rudy's defender? She says nothing about Terhune's recommendation? I guess her silence says this is aok with her and in my opinion that makes her quite the hypocrite.

I call Tracy Ryan Terhune directly out on his promoting this and more.

I ask him... while you sir are banning us from even being mentioned on your Facebook forums, while you are smearing our names with lies and defamatory statements running rampant on that eight-year-old designated hate blog you run under the title of Affairs Valentino..while you call all our hard work on the subject of one Rudolph Valentino, “fiction” and “trash:... this is what you bring to the table?

You call me a “madwoman?”

I call you out.