While I was writing Astral Affairs Rambova, I learned Natacha Rambova was furious to be billed as "Mrs. Rudolph Valentino" in her acting debut in "When Love Grows Cold." She made the film in the weeks after she left Hollywood, during the most bitter days of her separation from Valentino. The film was originally called, "Do Clothes Make the Woman" and then changed just before distribution to "When Love Grows Cold".

The movie had nothing to do with the status of her divorce from Rudolph, but distributors exploited her newsworthy divorce to such an infuriating degree, it ended Natacha's film aspirations. I did discover she appeared in one last movie with Valentino's cousin titled "Who Am I?"... and was proud to add that film to her filmography. I included an essay on that discovery with photos from the cousin, Cassio's, family archive.

Simon Constable attempted to take credit for my Cassio, "Who Am I?" discovery by posting pages from Astral Affairs Rambova without crediting it to me.

I always find it offensive when women are referred to by their husband's names, and in this case an ex-husband. It negates their identity. Evelyn Brent was given her name on the theater bill, etc. so why not Natacha Rambova? I think we know the answer.

This would have been in March of 1926, and there are reports that Valentino's movies were very often shown before her movie. It did not bode well with the ex-Mrs. Valentino. (More on the theater through the link below the image.) 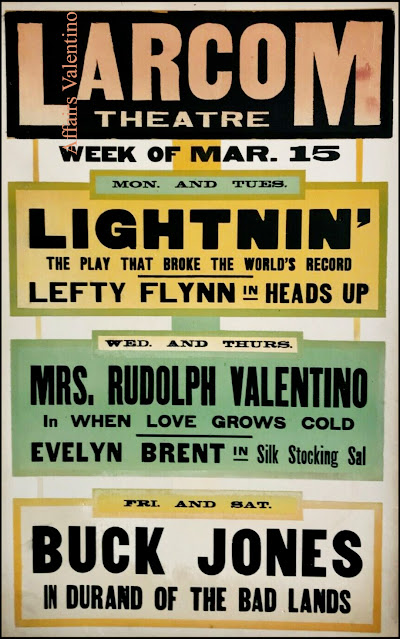