One of the more interesting things I discovered in the court records was the fate of Rudolph Valentino's dry cleaning business. Before I found those records, I had already read Natacha Rambova's “All That Glitters” and I had also read how Lou Mahoney claimed he had nothing whatsoever to do with that dry cleaning business. So I read the testimony about the dry cleaners with great interest.

In “All That Glitters”, Rambova clearly lays out a reason for the dry cleaning business with her character of Buckle. Her Buckle is obviously Mahoney and he begins the business to exploit the ability to clean Valentino's costumes and clothing. I found her even mentioning this rather outrageous as she criticized graft in Hollywood quite publicly. It was one of the moments in her play where she really toyed with her reality.

In the court records (the file I was able to recover), it is revealed how after Valentino's death, George Ullman paid off Valentino's dry cleaner's debt and sold the business to Lou Mahoney. If memory serves me correct... for $200. and this included a company truck.

I also found a census record from the 1930's where Lou Mahoney cites his occupation as “dry cleaner”.

Do I think Valentino cared about owning a dry cleaning business? Probably not at all. But it was one aspect of the estate settlement which I found interesting. And I think Natacha exposed it all in “All That Glitters”. Of course she has her character Buckle the hero for secretly running the dry cleaning business but was Lou in charge of it all along? Is that why Ullman pretty much handed it all to him?

I think there are many clues left in "All That Glitters" but this for me was huge. There is clear evidence/documentation Lou, the handyman certainly ran the dry cleaning business. 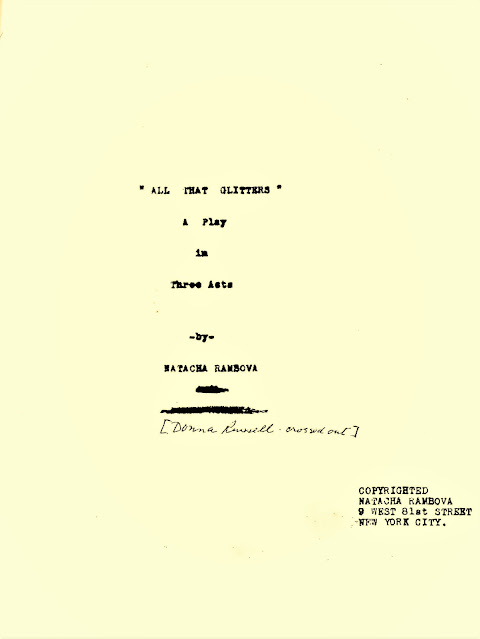