When I interviewed Bill Self in 2003, he liked to show me his Rudy collection but was cautious about revealing too much. I know if the Valentino family had not told him to stop talking to me I would have seen more, but that was not the case. His was a sort of carnival shell game of impressing me and hiding things from me.
Usually Self had a few things on his coffee table which I could handle. This is shocking because artifacts of museum quality should not be handled without gloves, etc. But even those artifacts were deftly removed and fairly quickly. Michael Morris was very frustrated by that routine but he did get to enter the walk in closet at the top of Self's stairs and view the clothing for one minute.
Self had a book shelf on the top of his stairs which held a collection of Rudy books. During one visit he removed a book, which was a copy of E. M. Hull's The Sheik. He did not hand it to me but opened it for a few seconds so I could see it was inscribed. He told me E.M. Hull inscribed it to Rudy and Alberto told him it was the only book Rudy ever read cover to cover. I remembered that precisely because I was surprised to hear this was, "the only book Rudy ever read cover to cover" And this was something Alberto said?
So imagine my surprise when many years later the following was sent to me. (see below) Was this the same book Self so quickly closed and set back on his shelf? Or was there another book inscribed by Hull. I never got a chance to clarify. But why would Florey inscribe this to Self as if he was the author? I doubt somehow Rudy kept a copy of The Sheik on his bedroom bookshelf, perhaps he did. Did he have a bookshelf in his bedroom? Whatever the answer, whether there were two books or this was more of Self's slight-of-hand... I think in some ways Florey desecrated the book with his brazen inscription. And his dating it 1921 is quizzical and deceptive because Self was not in Hollywood then and would not arrive until the early 1950's. 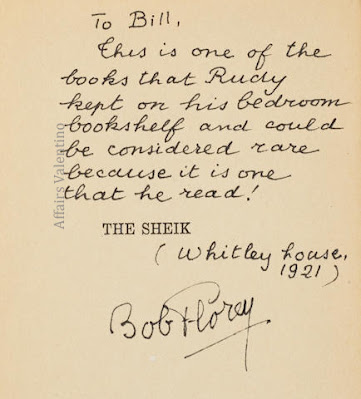