Interviewing Norma Niblock's two children was thoroughly enjoyable. Each of them had a different way of reminiscing and we worked out our interviews around that.

Sally lives a long ways away from me and there were time changes to calculate. So we set up a routine of my calling at the same time, in the late afternoon. She would be excited to answer my questions and would talk about 45 minutes before she was done.

Roger wanted to be called in the morning. He could talk longer and gave me his cell number in case I had any questions for him and he was out.  During our first two calls, he told me in great detail his military history.

When I had 20 pages or so for them to read, I sent the packages off. I called after they read them and we went over any changes. Sally, for instance told me that her parents only rented the Saticoy ranch when I had them owning the property.

They both read the manuscript before it became a book and were very excited and pleased about the outcome. These adorable tykes waited a lifetime to tell their Mama's story. Here with their beloved father, Holland. 1933. 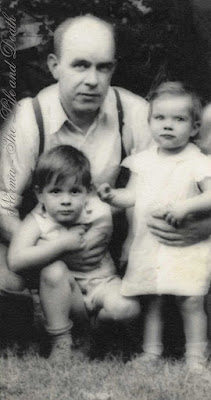