The Research Delusions of Simon Constable

Simon Constable seems to be at war. Riding into battle on his Facebook group, Mad About the Boy to issue his no nonsense edicts to his followers...about me. Which he has just done again. What? He expects grown people interested in Valentino to just say “Ok, Simon, we'll never mention Evelyn Zumaya!” and act like his subservient, obedient children? That is no different than the schoolyard bully demanding their way or else! I think the “or else...” is really implied in Simon Constable's most recent banning of me.

To the members of that group I say this...if I saw some post like that, demanding I comply or else!... I would click “Leave Group” so fast. I hope you all do so.

I had a friend once who used to tell people, “Grow or Go!”. This meant to get with the times and move on cooperating in a kindly way or go far away and do that right now.

I am saying that directly to you Simon Constable as well as the following:

You are absolutely incorrect about many things which Renato and I have proven with documents and facts.

Your research is flawed because imo you are not a reporter or a historian. This is because your personal agenda is imo so hell-bent brazen and obvious, any data you bring forth is just buried miles deep in your motives. How could anyone respect the research of someone who is banning my very name from being mentioned... or else!?

To you, Simon Constable...you do not perceive all the research discoveries we bring forth as interesting data about Valentino. For you, it is a threat to you personally. You go on the attack and run destroy missions disguised as research. Pardon my saying so but the credibility of our sources, makes such a reaction on your part a losing battle.

We are always interested in new Valentino discoveries and material and are fortunate to have people share things with us. But your obvious and malicious motives, Simon Constable leave your research biased, tid bits presented out of historical context and cobbled together in some “ sensational trashing” of rationality... You contort your sketchy constructions into your own delusional version of events. Because you make a point of being in direct opposition to the existing credible first hand accounts and archival data... imo, you Simon Constable are destructive to the legacy of Rudolph Valentino.

I add to my readers that I understand of course Simon Constable is free to oppress the members of his Facebook group any way he wants to. So I am responding then to his choice of back ground he used on his banishment post. Because I am a lady who does not take shit.

Citing Fair Use Guidelines used as an excerpt to illustrate my point: 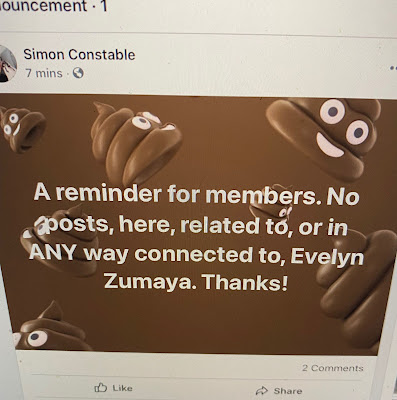 I think it is really obvious just who is the POS – emoji.