Tracy Terhune has posted a header with a picture of the most abused character in Valentino's story, George Ullman with a bold, black title screaming across the image saying: “Black Market”.

This says much more about Terhune than Ullman and reeks of desperation as he tries to isolate a point in time to make Ullman look like a villain. Did anyone ever call the police on George Ullman, was he ever arrested or charged with a crime? No he was not.

So this begs the question...what is the black market to Terhune anyway? Terhune should know I guess, as he wheels and deals  and seems to know all about it. “Black market” is just another of his hit tag lines he hangs on to...such as calling all of my work, “fan girl fiction” or “trash fiction”, calling Renato "Child Star 72" and calling Rambova “the worst thing to ever happen to Valentino.” He parrots these lines and has for years.

The market of Valentino collectibles is a disgusting state of affairs and now primarily because Tracy Terhune is running the shit show. I have made no secret of my feelings on this. With Terhune's long history of factual blunders about Valentino...anyone who takes his word as truth, imo is very gullible indeed.

This is a man with malice in his blood imo. I cite as personal proof of this statement...the cruel and spiteful hit blog he runs (and has run for nine years and counting) under the title of my book, Affairs Valentino. There he hosts the likes of David Bret (someone who was defeated by me in a landmark defamation lawsuit) and together they have spent years on end writing malicious lies defaming us.

Tracy Ryan Terhune has no interest in historical context, in being respectful, no interest in the truth about Valentino as we discovered it. He wants to destroy our work and that is obvious today. Terhune never made a tiny move to contact Bob and Bunny Ullman to ask them a single question and just handed over the piles of cash, “ca-ching!”... to buy all the merchandise he could to build a shred of credibility for himself. Imo without that he would have zero presence.

Did Terhune wake up today thinking... what more can I do to ruin Valentino's legacy and those who Valentino trusted and loved most? Seems that way to me. His schemes to destroy have gone on for years and years and I am living testimony to his behavior... from Hala Pickford to George Ullman, to Natacha Rambova, Renato Floris, Me... oh, its a long list.

Quite simply, after all this time being hit by this man, imo Tracy Terhune is the worst thing to ever happen to Valentino. I think he and his obedient sycophants are only savaging Ullman to hit back at me as he knows we present truth with documentation. And he is acting desperately now that this blog has such an intelligent following! Thank you everyone for commenting and being so savvy and historically interested!!

If Terhune is so invested in truthiness then why does he hide those court records he says he has seen three times? Who is he protecting.. name the names of those true black market dealers and actual thieves.

Frankly, Terhune's daily hit pieces on Ullman should send his followers for the door because they are so cruel and absurd in light of what happened to this man; the actual history not Terhune's innuendo. Terhune implies Ullman came to have those relics by stealing them. He did not... he had an archive of Rudy papers in his garage (which was stolen by collectors) and had these papers legally as he was the business manager when Valentino died. He was not just some vicious collector who went out frantically dealing on the actual black market to feed his Rudy obsession. He was the business manager and executor.

Has Terhune ever mentioned how Ullman was held responsible for repaying Alberto all the money he advanced to him in good faith? To my knowledge he has not. I could make a mile long list of things we have discovered which Terhune will not touch. Contrived is the word I would use on his latest piece of butchery.

As pointed out to me, Terhune likes to imply Ullman was dealing in some darkened alley when in fact there were invoices, with his name and address on them. How is that nefarious?

I really wonder if Terhune would dare say any of this to George Ullman's face or Rudy's for that matter. And I wonder if he would have said any of this while Bob and Bunny Ullman were alive.  How very convenient for him that they are all dead and can not defend themselves.

In light of all the people I have seen Terhune attack over nearly two decades of my life, of all the horrendous abuse we have had to take from him, in light of the public attempts he has made to impede our right to do business and in light of his open censorship and his “Campaign to Ruin Evelyn”... I say he should not to have any voice in this subject all. I say call Tracy Ryan Terhune out on everything. Ask him all the questions.

So here (see below) the last photo taken of the honorable and just George Ullman and I say to Terhune, “Say it to George's face.” After all this man was subjected to for his loyalty to Valentino are you just going to smear mud in this face? 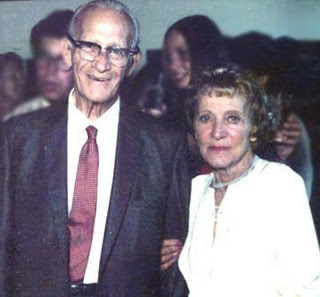