With All Due Respect

This is an extremely rare e-mail from Valentino collector William (Bill) Self to me. (see below)  I say rare because he was careful not to have anything he said in writing. As I have mentioned he did not even like me taking notes during our visits. I did so discreetly. He sent this e-mail to me to inform me he was no longer communicating with Campbell's Funeral Home regarding the purchase of Valentino's shipping case or sarcophagus. I would discover soon after this e-mail that he had already contacted the owner, Dick Cunningham and the case was already gone.

Self also responds to me in this e-mail about my request to view the probate court records. He told me collector Jim Craig had them and I asked if I could in the least read them and he said he would ask. As I have mentioned Self told me the entire case file of the stolen court documents were returned to the family/Jeanine Villalobos. I would learn later from Donna Hill that this was in exchange for one of Valentino's shirts.

Now this is not new information but the shocking remark in this e-mail for me was that Self believed that case file "belonged" with the family. No, with all due respect Mr. Self, they are public documents and the property of the state of California. They are by law required to be housed in the Hall of Records and are certainly not private property. As mentioned I did manage to find the Appeals Court copies of some 1000 pages of the file about one year later. As always this print out could be verified because it would be, as an e-mail, preserved on the servers of sender and recipient. I find it interesting he was careful not to mention Jim Craig's name in this e-mail but did mention the Valentino family spokeswoman by name. 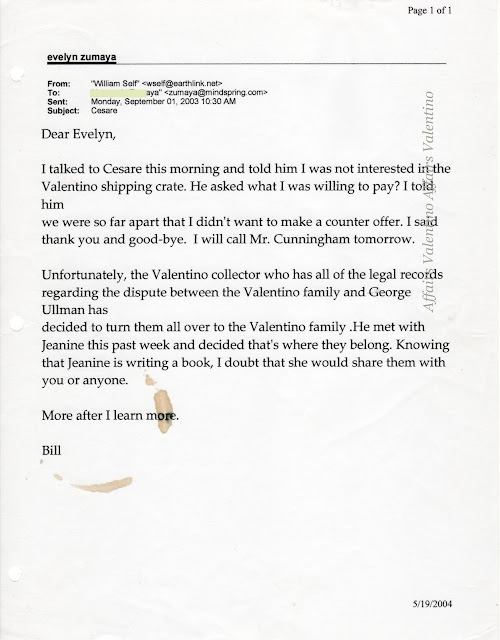