When You Write A Book On Rudolph Valentino....

One of the more bizarre things that happened to me because I wrote Affairs Valentino, was being accused of kidnapping a child. Here is how that happened.

In the fall of 2011, we decided to retreat to a friend's familiar place in Morocco for a few months. Despite the distance, the daily attacks against me, my work, my family continued everyday online and there was no escaping that even in Africa. For a while I did my best to respond but that would come to an end. As I have mentioned in some of our podcast episodes, when David Bret threatened to open a blog against my ex-husband, I panicked and closed my blog. This is the blog Tracy Terhune has run ever since to divert web traffic and inspire hatred and scorn about me and my husband.

Now in the fall of 2011, it seemed David Bret was involved in another online furor. This was the disappearance of the British child Madeleine McCann. I knew next to nothing then about the case but as Bret was involved in an aggressive assault on me and also heavily engaged with the McCann situation, it was not long before some of them contacted me. I am still not sure of the details of that mess but I believe Bret was against the child's parents saying they were involved in her disappearance. In any case, it was a heated battle about a tragic situation and one I wished to have no involvement with at all.

I made a post expressing my dismay that Bret would have anything to do with missing children because the nature of what he was posting about me then was highly sexual and twisted beyond belief. This said my blog, before I closed it, was soon being read by Bret's McCann enemies as they were all hoping for some way to shut him up.

At one point I did begin to check their sites and blogs to see what was going on. And it was then I read a post one morning which reported how Scotland Yard had been contacted because apparently the author of that blog had some form of tracker on it to see who was reading. They went on to say that they believed the McCann child had been taken to Morroco and since I was logging on from my home in Morroco, they called authorities and gave them my IP address. I guess they believed the kidnappers were reading their blogs.

I remember looking at my laptop reading that... thinking it was some sort of homing device and I was about to be arrested by Interpol for the abduction of Madeleine McCann. I sent an urgent message to the blog administrator and waited to hear back. It was a long 24 hours before this was remedied.

Shortly after that I was forced into closing the blog and went offline for almost one year hoping this would stop the attacks. It did not and in fact made them worse.

I will add on this McCann subject that David Bret has accused me of having his blog shut down then when he was running some kind of petition; and I still have no idea what the purpose of that was. I never had any of his blogs shut down, although god knows I sure tried.

I think David Bret underestimated the force and fury of his McCann enemies and over the next couple of years they continued sporadically to contact me, send me images and screenshots and keep me updated. I sent them a minimal response and had little involvement with them because honestly I felt the case was one for the authorities and not to be debated in some hysterical online battle. Both sides in my opinion should have shut up.

I also add that at that time the attacks against me from Bret were so vicious and unstoppable I was trying anything I could for help. Some things I did were naive and some frantic, desperate... but there was no manual as to how to deal with such a thing. I did the best I could at the time and all in all to no avail.

The McCann people faded away and I have not heard from them in many years. They used to call me the “Valentino Woman” and for a while we had something in common. And for a little while they accused me of kidnapping.

In November of 2011, Renato and I sailed home on the Grandi Navi Veloci and it was cold... see below: 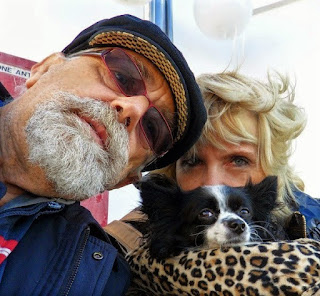