The Wrong Thing was Done

In 2003, I was interviewing Valentino memorabilia collector Bill Self and S. George Ullman's children Bob and Bunny Ullman for my Valentino biography Affairs Valentino. It was inevitable I would be looking for the probate court records of Valentino's estate to verify, with documentation, Ullman's performance as executor. I was somewhat surprised to learn how Bob and Bunny Ullman knew little about the fine points of this time in their father's life. But they knew plenty about how he was attacked and maligned by the Alberto Valentino family. This had been a part of their entire lives and something they hoped I could help them with... to know just what was the truth.

I asked Self for help in finding those records.... because they were “missing” from their rightful location in the LA County Hall of Records. Self was cagey but finally told me how he read those stolen records. He then told me who had the records... another collector... and said he would ask him if I could read them.

Self replied “no” to me by e-mail (which I still have) saying the collector decided to return the case file of records to “where they belong”; and this was the Alberto Valentino family. I was furious. Those records belonged in a public archive. Self knew Bob Ullman was truly on his death bed hoping to know the truth about his father... yet those records were not returned, not shared and hidden away from any public review. And I ask again... why hide if there is nothing to hide?

I have written about this a great deal and will not revisit it all here today. I instead point out how insidious these collectors can be in withholding and parsing out information, sharing one document and not another. And I allege they do this to exploit their market and to elevate themselves as experts in the estimation of the Valentino fans and followers on their Facebook forums. It is easy for me to see how these collectors manipulate their followers, treating them as potential buyers and a way to market the value of their collections. It would not be so offensive if it were not all so calculated, so shady and their interest in Valentino... well commercial.

It would have been the right thing to do... to allow Ullman's son to see those records which he had every legal right to review. But the wrong thing was done and he died not having that opportunity. I was able to recover enough of that file in copies for him to know the truth; his father was the great hero of Valentino's story. 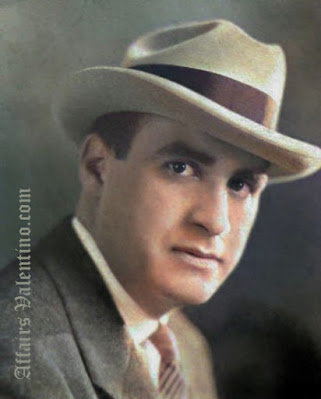