A Theory From a Reader

I received the following message and images from a reader... I thought it could be shared here for insight. I did receive permission to post the message here:

“...I got curious again about that recessed area on the right side of Rudy's nose. It's the area that I mentioned to you that is noticeable in the death photos and also on the artist's drawing on the cover of your book. I wanted to share this interesting stuff I learned about the effects of syphilis on nose cartilage. I wonder if he was already in the third stage of syphilis since the blindness was already present in his eye when he began his acting career. I also wonder if he was made sterile from it. I wonder if he ever did get Natacha pregnant. Maybe he was sterile and those rumored pregnancies were from another man that she was having an affair with? I know that seems kind of far fetched, but is it really? If so, that would be enough to make a spouse want a divorce right away. Maybe he wasn't the one who impregnated her?

On page 213 of Ullman's book he says 'One day he surprised me by asking for a mirror. I was loath to humor him, as his illness had left marks upon his face I did not wish him to see.'

Who knows how long the disease would take to completely ravage his beautiful face. What if he had lived long enough for that to happen to him but not in time for a cure? I don't know if all sufferers of the disease eventually lose their nose or become horrifically scarred over time. Probably not. King Henry VIII had syphilis and he only lived long enough to lose his mind instead of his nose. What an absolutely horrific illness.

I found some modern photos of someone with syphilis scarring of the nasal cartilage that look very much like the area on Rudy's nose. I didn't know this, but people with advanced syphilis could lose their nose completely.

'Does syphilis destroy the nose?

Syphilis and leprosy are bacterial infections that can have many health implications, including lesions and ulcers that attack the cartilage in the nose. If left untreated, these infections could cause permanent damage to the nose, resulting in a saddle nose deformity.'....” 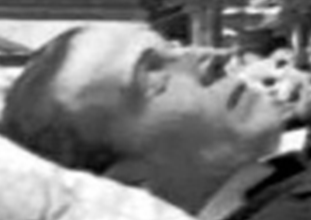