I have some serious business to take care of today. David Bret seems unhappy with the names he is being referred to here. This is the height of hypocrisy coming from him.

I am not one to call people names but I feel at this point the comments on this blog concerning Bret are more than justified. Has he forgotten the decade of name-calling of me, Renato, my friends and family? He began calling me names in 2009, bore down when my Dad died and within days was calling me a “daddy-f-er”. He has called me a “coke head”, alleging I did cocaine when none of that is true, claimed I had warrants out for my arrest, posted my personal information with enticements to do me harm, etc. He now whines piteously about the name-calling here. I can not think of another person on earth who karmically deserves every brilliant and truthful moniker shared here as comments.

He has not just name-called but done so at times on up to five blogs devoted to defaming us. In 2014, I made a video response to his bullying in which I read some of the names he called me up to that time. Bear in mind some seven years have passed since this was recorded and he has not stopped for a day.

He claims we write the comments here but we do not. I would add that the names he is being called here imo are accurate. Because he mocked the death of my beloved father and ruined his online search with pornography, Davis Bret IS a bastard and those names all make perfect sense.

Bret claims Renato penned most of the things said about him in this blog's comments. Here follows Renato's response to this.

"One of David Bret's specialties is to invent quotes in an effort to fool people into believing his lies, his vile lies!

Recently, he commented on the blog Tracy Terhune runs under the title of Affairs Valentino, as a guest of his buddy. He cited my alleged insults both against him and Tracy Ryan Terhune and many other dubious characters.

Here is the example of David Bret's lies he posted as a comment on Tracy Terhune's blog on October 28, 2021. I excerpt under Fair Use guidelines to illustrate my point: 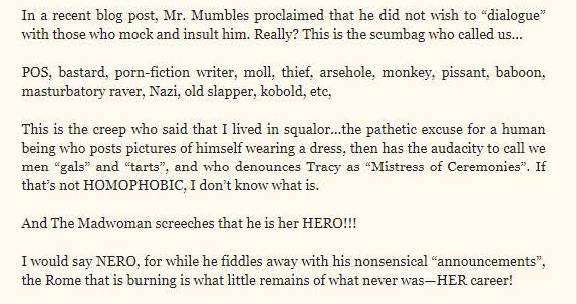 Apart from porn-fiction writer, which is not an insult but a pure and simple observation, the other epithets do not belong to my language and I never said those things at all. This is a lie by David Bret. I confess, I am not a great expert on English insults.

The worst, however, is what follows:

That my dressing in Morocco in Moroccan clothes is somehow deviant.

I did not refer to them as "Gals" and "tarts" and I did not denounce Tracy as "Mistress of Ceremonies". None of that has ever even crossed my mind. I can well say that, subtly, in my opinion, here Bret tries to put words into my mouth which he would love to say to Tracy Ryan Terhune. If there is a champion of homophobia here, he is David Bret; homophobic and cowardly because he wants to offend his host by making others bear responsibility.

Perhaps the sentence of the Asti court did not teach him anything, as it did not make him understand that future judgments could also land on his back.

I urge readers to consider all of Bret's claims about us, without valid documentation, absolute lies.

For Tracy I just say: Be careful not to hold a viper so close to your heart."

David Bret lost the defamation case we brought against him (see www.zumayawinslawsuit.com)  and in the verdict the judge addressed his rhetoric towards me: 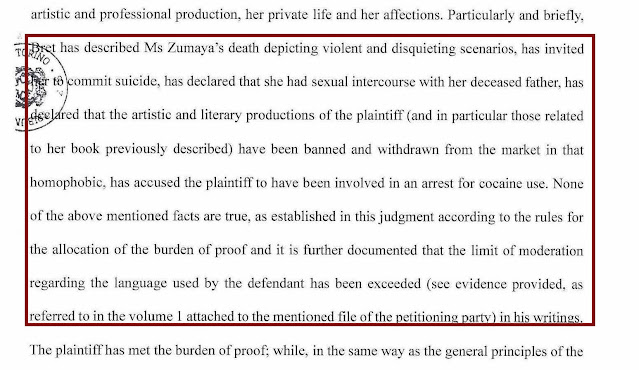 So his violent name-calling and defamation was of such a sick and high extreme there is no way it can be compared to the monikers and tag-lines about him left here.

To Bret I say shut up for god's sake. After all you have done and still do, the depths of depravity to which you resort...you have this coming and more. Own it.