“In theatre jargon, the “Heavy” is the character that provides the most conflict in the story. The heavy is the antagonist that creates obstacles for the protagonist to overcome. ... The Heavy is a big role for an actor, sometimes the biggest role in the work, eclipsing even the main character.” 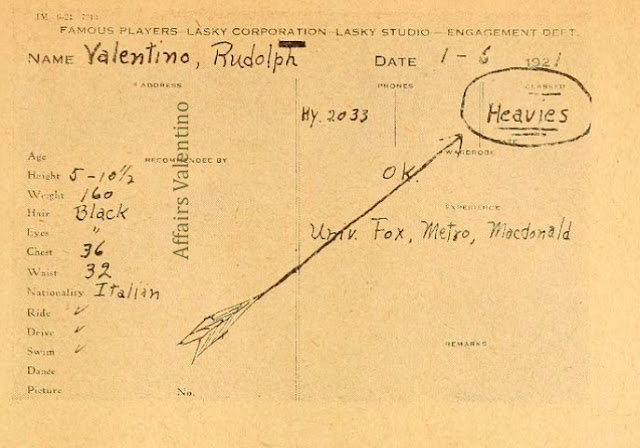 In January of 1921, Rudolph Valentino was classified as a “heavy” by Famous Players Lasky' Corporation's “Engagement Department”. Granted that is exactly what he was at that time with most of his roles being antagonistic. But I also wonder how much anti-Italian racism went into that classification. Were Italians just perceived as “providing conflict” because they were dark-skinned, Catholic, perceived as “agents of the pope”, foreigners arriving to take jobs away from Americans, etc.

Valentino was certainly victimized by anti-Italian sentiment but as I mentioned in Affairs Valentino, I think he redeemed every villainous role with his natural demeanor and elegance. No matter how hard they tried to cast him as the “heavy”, he did eclipse the main characters with something more than conflict. Obviously.

Did he not become the “heavy” by this definition in his own life and legacy by providing unending conflict? Although he did not personally instigate the furor today in his name, that arrow to the word “Heavies” can apply.

I call racism on this one because if he was pale skinned, let's say of English origin, he would be classified as the prototype of chivalry, classic nobility, gentleman etc. Did the dark skin and eyes and the entrenched xenophobia v. Italians at the time restrict him to this stereotype?

Natacha Rambova managed to break that pattern for her husband and anyone who says differently should go back and read the facts. She elevated him above this “heavies” stereotype and paid a very high price for doing so.