My Vindication - I Fight On

As I know David Bret reads this blog, because he prints it out, highlights portions of it and sends it to my lawyer claiming I am harassing him by reporting on the collection process against him, I write the following:

For his information the collection process is not final, no final decision has been made and the case is not closed and will not be until he pays me every cent he owes me. This case is ongoing. I received today from my lawyer a status report from the OR, or Official Receiver in charge of assessing Bret's ability to pay the damages awarded to us by the Honorable Judge in the Court of Asti.

The Official Receiver informs me he can be contacted regarding any “possible breaches of insolvency legislation” and that he will “continue to be responsible for investigating the cause of the bankrupt's insolvency.” This collection process is ongoing and will be until every cent is collected.

It is somewhat poignant that this would arrive to my desk today on what would have been the birthday of my beloved Dad. And this has re-energized me in my fight for justice. David Bret savaged me and my father's memory in the days following my Dad's death in 2010. Bret wrote disgusting things about me and my Dad which are too vile to repeat. He delighted in linking his filthy posts to my Dad's obituary in his local paper and he completely deprived me of any mourning period for my father as I was assaulted daily in the day's following his death by Bret's vicious and sadistic attacks.

Bret wrote our lawyer and sent along my post on this blog I titled, “Boundless Energy” saying that he knew I would “never let this go.” No I will not. I will fight for justice for myself, for Renato and for my Dad on this his birthday. Until my dying day I will be pursuing collection on this legitimate debt and I might suggest to David Bret, “World's Greatest Author”/ “In Bankruptcy”, that instead of printing out this blog and wasting his time forwarding it all to my lawyer who has no more reason to ever communicate with him... that he best start paying on those damages he caused me. It will be the only closure on this subject. He can count on that. I vindicate my Father's memory from Bret's unthinkable defamation!

And yes, I have been reporting on this for years and will continue to do so. This is a public case and anyone can access the records. I write the truth... truth be told.

My Dad playing chess with a student in 1960. (He was a champion chess player)  Happy Birthday Daddy... I fight on. 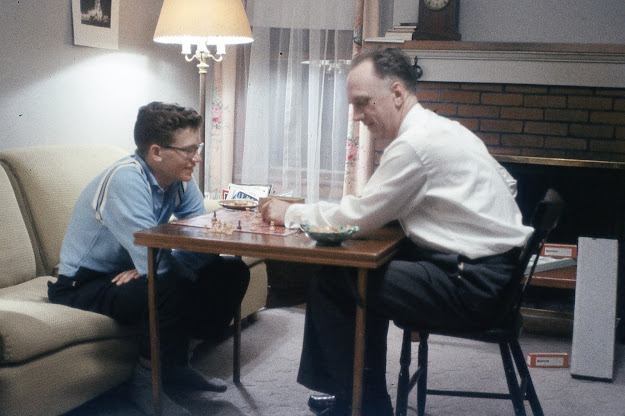